Home » Cricket » Ind vs Eng 2021: Prasidh Krishna reveals what he changed in his bowling after hammering in opening spell

Ind vs Eng 2021: Prasidh Krishna reveals what he changed in his bowling after hammering in opening spell 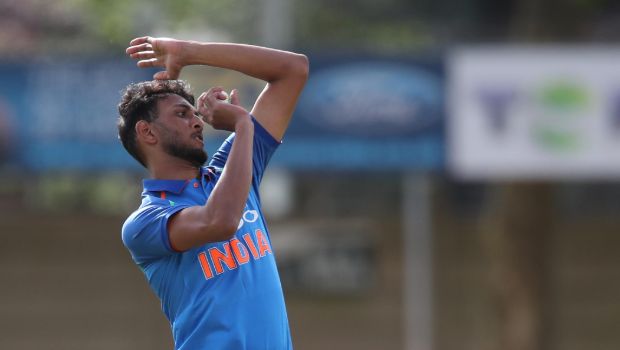 India’s debutant Prasidh Krishna had a rollercoaster debut against England as India won the first ODI by 66 runs at the Maharashtra Cricket Association Stadium, Pune on Tuesday.

Krishna took a beating in his opening spell as he conceded 37 runs in his three overs, including a 22-run over in which he was smashed for two sixes and as many fours by England opener Jonny Bairstow.

However, the fast bowler from Karnataka was able to turn the tables in his second spell and third spell as he returned with figures of 5.1-1-17-4. Thus, Krishna finished with 8.1-1-54-4 and thus registered the best bowling figures by an Indian bowler on debut.

Krishna was on the fuller side in his opening spell and he was taken to cleaners by the England openers. The 25-year-old then bowled in the good length areas in his second spell to reap the rewards.

Krishna provided the crucial breakthrough of Jason Roy when he yielded extra bounce from the surface to break England’s opening alliance of 135 runs, which was taking the game away from the home side. The lanky fast bowler was able to make good use of his height and pace and then accounted for Ben Stokes, who failed to get going.

In fact, Krishna could have scalped a five-wicket haul had Virat Kohli held on to a catch at first slip against Eoin Morgan on the first ball. Krishna then dismissed Sam Billings and Tom Curran later in the innings to help the hosts make a roaring comeback into the contest.

Prasidh Krishna said after the match, “It didn’t start off well, and they came hard at us because we bowled poorly, but we had belief. We picked wickets in a cluster and that helped us a lot. I understood after my third over, I can’t bowl full, and then I hit good length areas, and let the ball do the rest. IPL has helped me, but it’s important in a 10-over format it’s more important to come back. I’d like to be known as a hit-the-deck bowler, and I’m trying to get the length more consistently, and I’m going to go back to the drawing board and improve upon it. I hope I can be the partnership breaker for long because the team needed it at the time, so I was happy to do it. The talk from the beginning was that if we get one wicket it’ll change things around and that’s exactly what happened”.

It was good to see that a debutant was able to learn from his opening spell mistakes and bounced back in style to play a key role in the team’s win. India and England will play the second ODI at the same venue of Maharashtra Cricket Association Stadium, Pune on Friday.