Home » Cricket » Ind vs Eng 2021: Pressure is always there in International cricket, I know how to handle it – Shikhar Dhawan

Ind vs Eng 2021: Pressure is always there in International cricket, I know how to handle it – Shikhar Dhawan 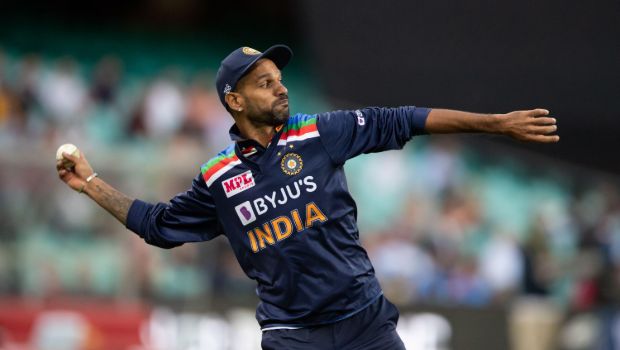 India’s experienced opening Shikhar Dhawan was under a bit of pump after he couldn’t get going in the first T20I he played against England and thus lost his place in the side.

However, Dhawan bounced back in style as he scored a fine knock of 98 runs from 106 balls to help his team post a par score of 317 runs in the first ODI on Tuesday.

Dhawan took his time in the initial phase of the innings and then changed gears to help his team. The left-hander brought his fifty as well as the team’s hundred when he slog-swept Adil Rashid for a six over deep mid-wicket. The southpaw also had a rub of the green on his side as he was dropped by Moeen Ali when he was on 59.

Dhawan stated there is always pressure at the International level but he knows how to handle it as he has all the experience under his belt. The left-hander has been a consistent performer in the 50-overs format and he has done a fine job in the past.

Dhawan scored 11 fours and two sixes in his knock but missed out on a well-deserved hundred. However, Dhawan stated he is not someone who thinks about personal milestones and the team’s success is of more importance to him.

“(In) international cricket, pressure is always there and the thing is as an experienced player, I know how to handle pressure. “…and secondly, as I said, I am an experienced player, so I know what shots to play on what certain wickets and we read the wicket nicely and communicate very nicely in the batting unit and that’s what we did and that worked for us,” Shikhar Dhawan said at the virtual post-match press conference.

Meanwhile, Dhawan was dropped from the final XI after the first T20I but added he stayed in the positive mindset and kept working in the gym sessions as well as the nets to get better.

“I was focusing on my process, fitness, skill-work, gym-work and I always stay in a positive mental space. I always try and look at the positives from every situation. That’s what I was doing. I was confident with my batting. I knew that if I get an opportunity, I’ll take it,” the left-hander added.

On the other hand, India got off to a sedate start as Rohit Sharma and Shikhar Dhawan added 64 runs in the first 15 overs. The ball was swinging and seaming around and Dhawan added that there was no point in going hard at the beginning of the innings.

“It was seaming and swinging so, it wouldn’t have made any sense if you would have gone hard at the start, losing two-three wickets, so our plan was just to stay on the wicket and respect the good deliveries and we knew that, we can always cash those runs later on,” he signed off.

The second ODI will be played at the same venue in Pune on Friday.