Ind vs Eng 2021: Ravichandran Ashwin and Axar Patel made life difficult for us – Chris Silverwood 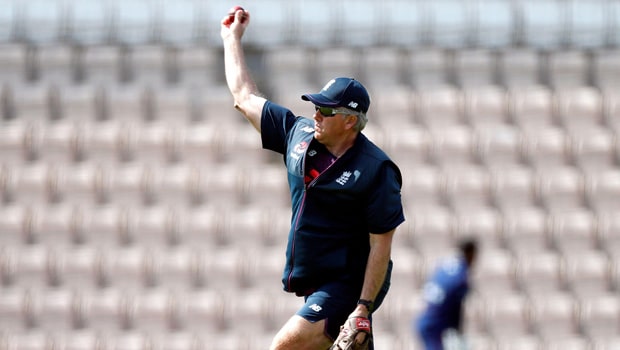 England’s head coach Chris Silverwood has admitted that Indian spinners – Ravichandran Ashwin and Axar Patel – made life difficult for them in the recently concluded four-match Test series. Both Ashwin and Patel were relentless in their approach and breathed down the neck of the opposition batsmen.

Ashwin scalped a total of 32 wickets in four Test matches at an unbelievable average of 14.72. The off-spinner continuously troubled the English batsmen with his variations and the visitors had no clue against him. Furthermore, Ashwin scored 189 runs at an average of 31.50 and thus he was awarded the Player of the series for the eighth time in the Test format.

On the other hand, Axar Patel made a dream start to his Test career. Patel was picked in the absence of all-rounder Ravindra Jadeja, who missed out due to a thumb injury.

The left-arm orthodox spinner from Gujarat, scalped 27 wickets in three Test matches against England at an impressive average of 10.59 as he bamboozled the English batsmen with his arm delivery. Patel returned with figures of 2-40, 5-60, 6-38, 5-32, 4-68, 6-48 in the six innings he bowled.

Thus, the 27-year old spinner bagged a total of four five-wicket hauls in the six innings. Meanwhile, Patel’s 27 wickets are the most for any debutant player, for bowlers who played a maximum of three Test matches. Sri Lanka’s Ajanta Mendis had snared 26 wickets against India back in 2008. Ashwin and Patel were able to keep the pressure on the England batsmen and there was let off from any end.

“They (Ashwin and Axar) made life very hard for us… India outplayed us, and they deserve a lot of credit. They came back hard after the first Test,” Chris Silverwood said during a virtual press conference.

“They outplayed us in their conditions. I’m going to give a lot of credit to the Indians. They came back hard after that first Test. We expected them to, but they came back very hard,” he added.

India are always a force to reckon with in their own conditions and the spinners did a fine job in keeping England at bay. The hosts made a resounding comeback to win the series 3-1 after losing the first Test by a massive margin of 227 runs and a lot of credit goes to Ashwin and Patel.

Patel is part of India’s T20I squad whereas Ashwin will now be seen in action in the IPL. The first T20I will take place at the Narendra Modi Stadium, Ahmedabad on March 12.