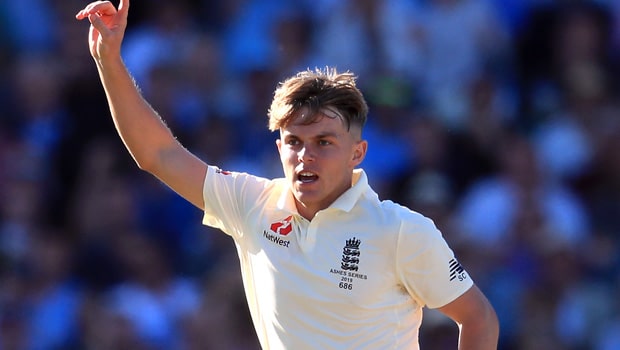 England’s all-rounder Sam Curran is set to miss the third Test match as he hasn’t yet traveled to India. Curran was expected to be part of the England squad for the last two Test matches but the ECB has decided to delay the all-rounder’s inclusion due to bio-bubble fatigue.

Players like Mark Wood and Jonny Bairstow are expected to be part of the England squad for the last two Test matches against India. However, Curran won’t be available for the third Test match and he would only in the reckoning for the fourth Test match.

ECB said in a statement, “Sam’s been given a few extra days to recharge his batteries after a lot of cricket and time in a behind-closed-doors environment.”

Meanwhile, Sam Curran had done a fantastic job for the England team against India when he had played at the top of his game in the 2018 series in England. The all-rounder had delivered the goods with both the bat as well as the ball. The southpaw had scored 272 runs in four Test matches at an impressive average of 38.86.

Furthermore, the left-arm seamer had scalped 11 wickets in four Test matches at an average of 23.55. Thus, he was awarded the Player of the series and he was the difference between the two sides as England had thwarted India by 4-1.

India’s head coach Ravi Shastri had also stated Sam Curran had hurt the Indian team in that series as he had come up with a magnificent performance.

On the other hand, England had taken a 1-0 lead after they defeated India by a gargantuan margin of 227 runs in the first Test match. However, the Indian team has bounced back in style in the ongoing second Test match as they have put their noses ahead. The hosts posted a par score of 329 runs in the first innings after Rohit Sharma, Ajinkya Rahane and Rishabh Pant scored 161, 67, and 58 runs respectively.

Moreover, the England innings is in tatters as the tourists are struggling at 106-8. Thus, the visitors still trail by a massive margin of 223 runs.