Home » Cricket » Ind vs Eng 2021: Shreyas Iyer ruled of last two ODIs, likely to be ruled out of first half of IPL

Ind vs Eng 2021: Shreyas Iyer ruled of last two ODIs, likely to be ruled out of first half of IPL 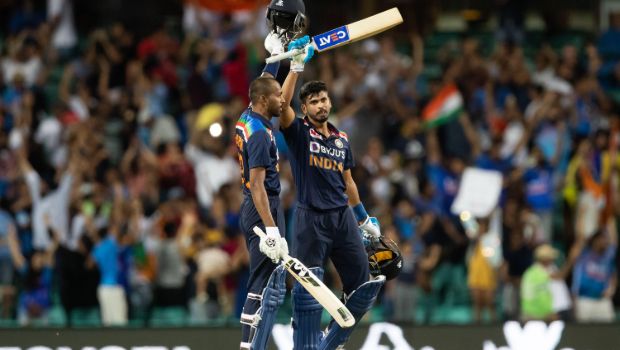 India’s middle-order batsman Shreyas Iyer has been ruled out of the final two ODIs against England after he subluxated (partially dislocated) his left shoulder.

Iyer suffered the injury while attempting to stop a ball while fielding at extra cover in the first ODI on Tuesday. The 26-year old was seen writhing in pain as the grimace was palpable on his face.

In fact, Iyer is likely to miss the first half of the 2021 Indian Premier League for Delhi Capitals and thus the franchise might need to appoint another captain. Shreyas had taken the franchise to the final of the tournament for the first time in the previous season of the IPL.

On the other hand, Shreyas Iyer has been in sublime form and his absence is going to be a big blow for both India as well as Delhi Capitals. Iyer had scored 121 runs in four T20I innings at an average of 40.33 and a blistering strike rate of 145.78 against England in a recently concluded T20I series. Thus, Iyer has grabbed his opportunities in the middle-order.

The Mumbai batsman had scored a fine knock of 67 runs in the first T20I and had provided the finishing touches in the fourth match as he had smashed 37 from 18 balls.

Consequently, either one of Suryakumar Yadav or Rishabh Pant is expected to replace him in the middle order.

Meanwhile, England’s county team Lancashire has signed Shreyas Iyer for the Royal London One-Day Cup. He will be flying to England on July 15.

Iyer was delighted after the signing and had said then, “Lancashire is a legendary name in English Cricket with a longstanding association with Indian Cricket. I am extremely humbled and honored to carry the legacy forward of greats like Farokh Engineer, Sourav Ganguly, and VVS Laxman at Lancashire. Emirates Old Trafford is a world-class international stadium, and I am looking forward to meeting my teammates and the supporters of the club”.

Iyer will aim to make a roaring comeback after injury. The second ODI will take place at the same venue of Maharashtra Cricket Association Stadium, Pune on Friday.