Home » Cricket » Ind vs Eng 2021: This innings is for you Papa – Krunal Pandya dedicates his performance to his late father

Ind vs Eng 2021: This innings is for you Papa – Krunal Pandya dedicates his performance to his late father 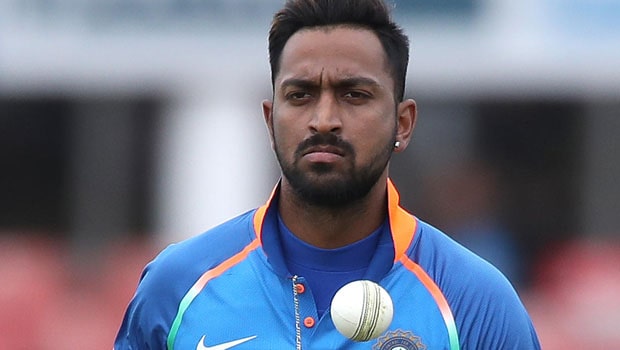 India’s all-rounder Krunal Pandya was able to break into the ODI team after impressive performances for Baroda in the Vijay Hazare Trophy. The elder Pandya’s emotions were high after he was handed over his maiden ODI cap by junior brother – Hardik Pandya.

Krunal came to the crease when India was in a spot of bother after the dismissal of Hardik Pandya and the home side were 205-5 after 40.3 overs. A score of 300 looked a distance away but the left-hander was able to hit the ground running.

Krunal took no time to get off the blocks as he raced to 18 off just nine balls. The southpaw completed his fifty off just 26 balls and became the fastest-ever to reach the landmark on debut. Pandya scored 58 from 31 balls with the help of seven fours and two sixes as he scored his runs at a whirlwind strike rate of 187.10.

Consequently, Pandya added 112 runs off the last 57 balls with KL Rahul to take India to a fighting score of 317, which proved to be enough in the end.

Meanwhile, Krunal was seen in tears after he hugged his younger brother after the completion of the first innings. In fact, the debutant also broke down when he was asked to give his interview.

The senior Pandya took to Twitter to dedicate his innings to his late father Himanshu Pandya, who recently took his last breath.

Pandya wrote, “Papa, with every ball you were always on my mind and in my heart. Tears rolled down my face as I felt your presence with me. Thank you for being my strength, for being the biggest support I’ve had. I hope I made you proud. This is for you Papa, everything we do is for you Papa”.

On the other hand, Krunal took a hammering in his first spell as he was taken to cleaners by Jonny Bairstow and Jason Roy. However, the left-arm spinner came back in his second spell and dismissed Sam Curran. Pandya finished his 10-overs quota with figures of 1-59.

Thus, Pandya had a perfect debut and he will look to continue the good show. The second ODI will take place at the same venue of Maharashtra Cricket Association Stadium, Pune on Friday.