IND vs ENG T20Is | Ishan Kishan totally took the game away from the opposition: Virat Kohli 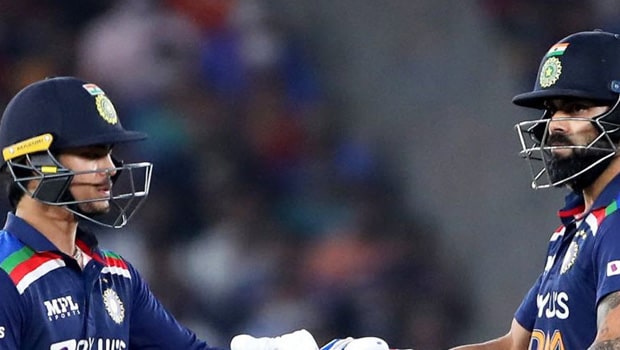 Jharkhand batsman Ishan Kishan came up with a stellar show on his T20I debut for India as he played an excellent knock of 56 off just 32 deliveries in the second T20I of the ongoing five-match series against England on Monday.

Kishan’s knock came at a time when his opening partner KL Rahul was out for a duck. He had Indian skipper Virat Kohli at the other end with him but the way he played, he completely overshadowed Kohli.

It was Kohli who took the attack on to the England bowlers in the powerplay initially but there was no stopping Kishan once he started teeing off in the sixth over of the innings.

As a result, India won the match comfortably by seven wickets and Kohli was full of praise for Kishan in the post-match presentation.

“Special mention to Ishan, the way he batted,” Kohli said.

“Changed the game completely. We were one down for nothing. I tried to do what I can but then he totally took the game away from the opposition. Kept following his instinct. Quality batting on debut,” he added.

Kishan brought up his fifty in just 28 deliveries after hitting back to back sixes off Adil Rashid. The attacking instinct and clear mindset that he developed while playing for Mumbai Indians in the IPL was clearly visible in his style of play on Monday. His innings consisted of five fours and four huge sixes, which means 44 off the 56 runs he scored came in boundaries.

“When you play in the IPL with such dominance like he has, against quality bowlers, we’ve seen him hit international fast bowlers for big sixes,” Kohli said.

“He’s a fearless character. He should continue to back his instincts. We had a conversation out in the middle where he understood and analysed the game very smartly. He knew he was hitting the ball well so he kept taking his chances. But he was calculated. He wasn’t reckless. And that’s what you want to see in youngsters.

“Coming in, looking composed, still backing themselves but being aware of what the situation of the game is and I think today that counterattacking innings of his and our partnership [94 runs off 54 balls] was something that the team needed and he provided that for the team.”

With Rohit Sharma expected to return to India’s lineup in the third T20I, Kishan has now given India a good headache. It remains to be seen whether the team would still choose to drop him in order to include Rohit, or they choose to make Rahul sit on the sidelines as he has scores of 1 and 0 in the last two matches.