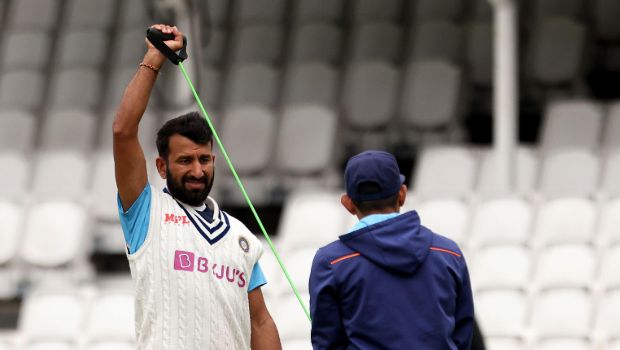 Former Indian batter VVS Laxman has opined that Cheteshwar Pujara’s long wait for a Test hundred is definitely a worry for the Indian team.

Pujara’s last Test century came 42 innings ago and he hasn’t been able to convert his start into substantial scores in the recent past.

The right-hander hasn’t been at his absolute best in the last couple of years and has failed to consistently deliver the goods for the team. Pujara’s previous century came in Sydney against Australia when he scored 193 runs in January 2019. Since then Pujara has failed to get to the three-digit mark.

“Yes, it’s definitely a worry. Because the batting position Pujara usually bats is No. 3. You usually get a lot more opportunities (to score hundreds) than when you’re batting at No. 5 or No. 6,” Laxman told Star Sports.

“Also, this is the type of dismissal that we saw quite consistently when India played England. Jack Leach got Pujara out 2 or 3 times in this fashion. The way he approached his defensive shot, the angle of the bat, he was not able to cover the turn. On this wicket, it’s important to cover the turn and be behind the line and the angle of the bat was not straight. That’s why the ball was carried to Ross Taylor,” he added.

Pujara was dismissed for a duck in the first innings of the second Test match at Wankhede Stadium, Mumbai. The right-hander had a good chance to end his hundred drought as he scored 47 while opening the innings in the second essay but once again could not convert his start as he was dismissed by Ajaz Patel.

Laxman reckons Pujara will be disappointed as he could not convert his start into a big hundred.

“It’s about people talking about that and it can get frustrating. The quicker you get to the 3-figure mark, then everyone will stop talking and then you can go out and do your business with a very, very free mind.”

Pujara will now look to make a solid comeback in the upcoming tour of South Africa, where India will play three Test matches and as many ODIs.