Home » Cricket » IND vs NZ 2021: Credit to India for the way they played throughout the series, says Mitchell Santner

IND vs NZ 2021: Credit to India for the way they played throughout the series, says Mitchell Santner 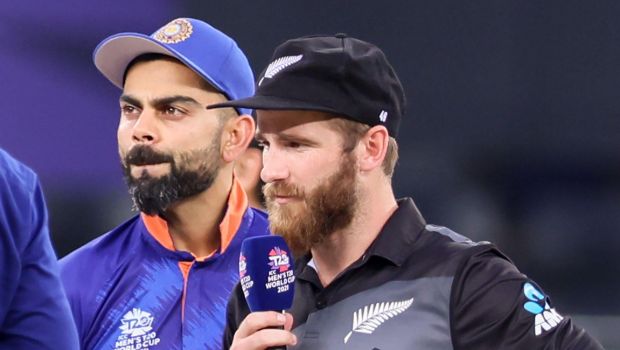 New Zealand stand-in captain Mitchell Santner gave credit to the Indian team for the way they played throughout the three-match T20I series.

The hosts dominated all three matches as they whitewashed the visitors by 3-0 after winning the third game by a gargantuan margin of 73 runs.

After deciding to bat first, Team India posted an above par score of 184 runs after fifty from Rohit Sharma and little cameos from Ishan Kisha, Shreyas Iyer, Venkatesh Iyer, and Deepak Chahar.

On the other hand, New Zealand kept losing wickets at regular intervals during their run-chase and was skittled out for a paltry score of 111 runs. Axar Patel was the pick of the bowlers for the home team as he scalped three wickets and conceded only nine runs in three overs he bowled. Furthermore, Harshal Patel scalped two wickets while Yuzvendra Chahal, Deepak Chahar, and Venkatesh Iyer took one wicket each.

Mitchell Santner said while talking in the post-match presentation, “Tough one to predict what the dew is going to be like. They bowled very well at the top, especially Axar. Credit to India for the way they played throughout the series. We were probably off. Came up against a very good Indian side. There were periods in every game”.

He added, “The pressure Rahul and Rohit put on us was tough to come back from. He’s obviously a great player for us (Kane). With the schedule being quite tight, it gives other guys an opportunity. With the WC being in 11 months’ time you always look ahead. The way Guptill batted at the top, different guys chipping in at different times (positives). Challenging as a spinner with dew around. The second game was very wet. The way Ashwin and Axar adapted was brilliant”.

Meanwhile, it wasn’t easy for New Zealand to hit the ground running as they were coming into the series after a heartbreaking loss in the World Cup final against Australia.

The hosts were able to make the most of their own conditions and dominated all three matches to come out on top. The tourists will now look to make a solid comeback in the two-match Test series.

The first Test match will be played in Kanpur from November 25.