Home » Cricket » IND vs NZ 2021: I will open with Wriddhiman Saha if Mayank Agarwal sits out, says Wasim Jaffer 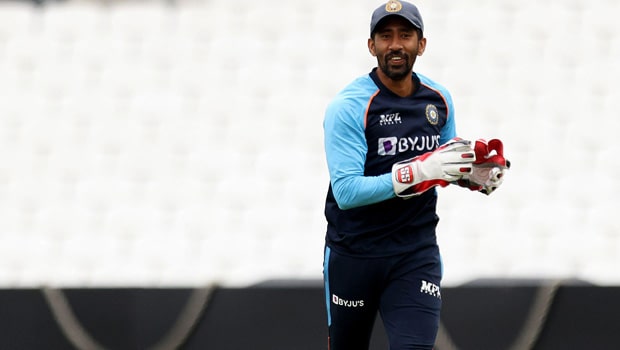 India’s former opening batter Wasim Jaffer reckons Wriddhiman Saha can open the innings with Shubman Gill if the team’s think tank decides to drop Mayank Agarwal in the second Test match against New Zealand. Jaffer feels either Mayank Agarwal or Ajinkya Rahane will make way for the full-time Indian captain Virat Kohli, who will come back into the team for the second Test.

Agarwal could only return with scores of 13 and 17 in the opening Test while Rahane continued his dismal form as he could only manage 35 and 4 in each of the innings. Agarwal is playing after a long time of 10 months while Rahane is leading the team in the first Test. Furthermore, Cheteshwar Pujara is also under the pump for his poor form.

On the other hand, Wriddhiman Saha was also under pressure to perform with the bat. The right-hander was able to grab his opportunity in the second essay as he scored an unbeaten knock of 61 runs. However, Saha has a stiff neck and there could be questions about his place in the team.

Wasim Jaffer said while talking to ESPN Cricinfo, “It’s a toss-up between Mayank Agarwal and Ajinkya Rahane. I would think on those two. That’s the toss-up that Virat Kohli has to make. Whether he wants to go with Mayank Agarwal and give him another go or whether [he thinks] Ajinkya Rahane hasn’t got enough runs in the last 10-12 Test matches after that Melbourne Test so he goes out. It’s a tough call, definitely a tough call. It depends on whom the sword falls on.”

“I think I will open with Saha if at all Mayank Agarwal goes out because then everybody bats out of their position. Pujara will open and then Ajinkya Rahane will bat at some other position… If Saha opens then everyone bats at the same position. And you can do that in Indian conditions with Saha. Is it a long-term call? Definitely not because India will go to South Africa. So they’ll have to reconsider their top-six for Mumbai.”

On the other hand, former New Zealand captain Daniel Vettori feels it will be easy for the team management to drop Mayank Agarwal to make a place for Virat Kohli as Rohit Sharma and KL Rahul will be the first choice openers for the tour of South Africa.

“I think most selection panels take the easy decisions and I don’t blame them for that. The easy decision is to leave Mayank out and open with Saha which I think is fair enough on a stop-gap scenario because Rohit will come back and KL Rahul will be fit again and they’ll look at those guys for South Africa. So for a one-off Test match, to keep the balance, to keep the feeling off the order that they want I don’t see any issues with that. Whether it’s the right call to leave Mayank out is debatable but I think it’s the easier decision to make so they’ll go with that.”