Home » Cricket » IND vs NZ 2021: It helped me grow my game – Kyle Jamieson on playing IPL before Test series

IND vs NZ 2021: It helped me grow my game – Kyle Jamieson on playing IPL before Test series 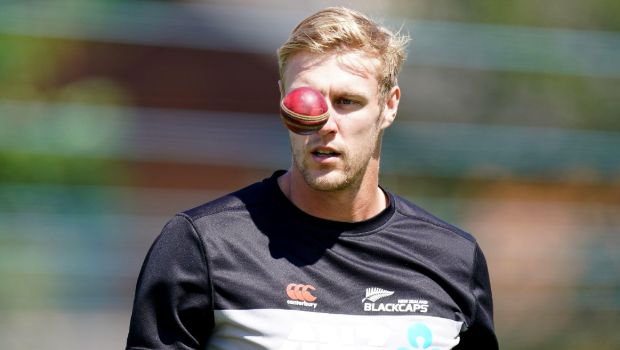 Jamieson played for the first time in sub-continent conditions in the first Test match against India, which is being played at the Green Park Stadium, Kanpur.

The towering fast bowler was the pick of the New Zealand bowlers as he scalped three wickets on the opening day of the first Test match. Jamieson bowled a lengthy first spell of six overs in which he dismissed Mayank Agarwal. The fast bowler provided another breakthrough right after the Lunch break as he got rid of Shubman Gill, who was well settled at the crease after scoring a fine fifty.

Jamieson also struck in his third spell as he got the better of India’s captain Ajinkya Rahane, who chopped the ball back onto the stumps.

Jamieson returned with impressive figures of 3-47 in 15.2 overs he bowled on the opening day of the Test match.

Meanwhile, Jamieson had played in IPL 2021 for Royal Challengers Bangalore and he has scalped a total of nine wickets in the nine matches he has played.

Speaking at a press conference at the end of Day 1, he explained: “Obviously, it (IPL) is a very different format but I got experience of some of the conditions over here. I also got to experience India as a whole. Anytime you get different experiences that you can learn from, it definitely helps your game, regardless of the country or the leagues. It helped me grow my game and gave me lessons that have been good enough to take on board moving into the series.”

Jamieson added that he didn’t try to make a lot of changes to his bowling while playing in the tough Indian conditions and reckons it was more about adjusting mentally.

“No, not a huge amount (of changes). From a mental perspective, I probably tried to get my head around not trying to change my game. I was pretty lucky to have guys like Tim (Southee) and Wags (Neil Wagner). For me, it was about taking my game and slightly adjusting to what was put in front of us.”