Home » Cricket » IND vs NZ 2021: It’s been good to see some of the young guys come through, says Rahul Dravid

IND vs NZ 2021: It’s been good to see some of the young guys come through, says Rahul Dravid 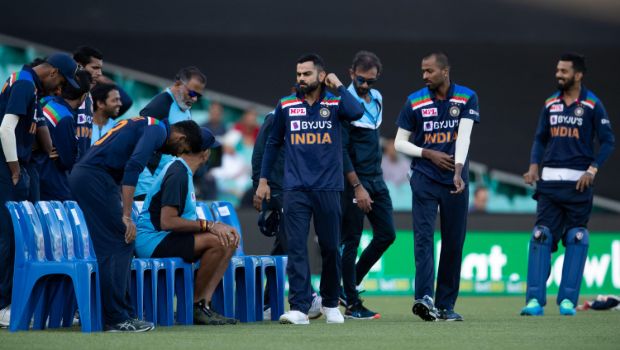 India’s head coach Rahul Dravid was delighted to note the development of some of the young players in the T20I series against New Zealand but at the same time, he wants to take a realistic approach.

India’s young guns were able to grab their chances in the three-match T20I series against the Kiwis as the hosts clean sweep the visitors.

Players like Harshal Patel, Venkatesh Iyer, and Ishan Kishan were able to grab their opportunities with both hands. Patel in particular was the most impressive as he scalped four wickets in the two matches he played against the Blackcaps at an economy rate of 7.28. Furthermore, Axar Patel also impressed as he scalped three wickets and conceded only nine runs in the final match of the series.

However, Dravid understands that it wasn’t easy for New Zealand as they were coming into the series after a heartbreaking loss in the T20 World Cup final against Australia and also didn’t play their best team in the T20I series.

“We have to keep our feet on the ground and be realistic, especially with bigger things down the line in the next 12 months,” Dravid told host broadcaster Star Sports after the third T20I in Kolkata. “It’s not easy for New Zealand to play a World Cup final, turn up three days later, and play three games in six days. We knew it was never going to be easy on them.”

Dravid added that it is imperative to help these young players to continue developing their skills and give them the right exposure at the top level.

“It’s been great to see the younger guys come through, we’ve given opportunity to some of the guys who haven’t played too much cricket in the last few months with the seniors taking rest,” Dravid said. “The greatest takeaway for us is to see the skills available to us. We need to continue developing those skills.”

It is well known that India has a potent bench strength and a lot of players have come through the ranks from the IPL. Dravid said it is a great advantage to have for the bright prospect of Indian cricket.

“It’s really nice that we have options,” Dravid said. “We can mix and match. Its going to be a long season, lots of games to be played till the next World Cup and we need to do that [rest and rotate] with some of our players and be realistic about how much cricket needs to be played.”