Home » Cricket » IND vs NZ 2021: It’s certainly going to be a different challenge to what we get back home – Kyle Jamieson on playing in Indian conditions

IND vs NZ 2021: It’s certainly going to be a different challenge to what we get back home – Kyle Jamieson on playing in Indian conditions 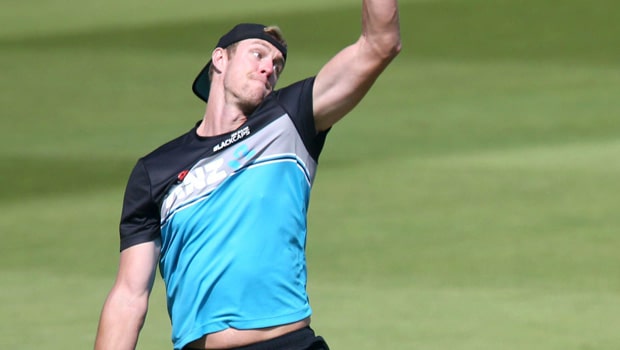 New Zealand’s lanky fast bowler Kyle Jamieson has admitted that it’s certainly going to be a different challenge of playing in the tough Indian conditions. It is well known that the Indian conditions are conducive for the spinners and the seamers hardly get much help from the surface.

Thus, the New Zealand spinners like Ajaz Patel and Mitchell Santner are going to hold the key for the visitors in the two-match Test series.

Meanwhile, this will be the first time when Kyle Jamieson will be playing in the sub-continent conditions, if he gets a chance. The gun fast bowler has made a dream start to his Test career as he has scalped 46 wickets in eight Test matches at an impressive average of 14.2. Out of his eight Test matches, Jamieson has played six in his own conditions.

“It certainly feels a long time ago. No better way to start than the challenge of India in India. I haven’t played a whole lot of cricket over here. I had the first half of the IPL which was good, but this will be different again. I’ve got Wags and Timmy here, so that’ll be good to bounce ideas of them, to get their expertise on how to bowl here. It’s certainly going to be a different challenge to what we get back home but really looking forward to it,” Jamieson said, as quoted by stuff.co.nz.

The towering fast bowler made his Test debut against India and scalped a five-wicket haul in his second Test. In fact, the gun pacer has scalped five five-wicket hauls in his young Test career.

Furthermore, he came up with a prolific performance in World Test Championship final against India as he had bagged seven wickets and thus was awarded the Player of the Match for his match-winning show.

Jamieson feels it will be imperative for him to not change his game too much in the Indian conditions. The fast bowlers wants to stick to his strengths but also adapt to the new conditions at the same time.

“First and foremost I think for me it’s not trying to change my game too much – still try and stick to my strengths but try and adapt to what the conditions give. If I do play and get the new ball, it’s trying to swing that and as the conditions change and the roles change throughout the game, try to focus on that.”

The first Test match between India and New Zealand will be played in Kanpur from Thursday.