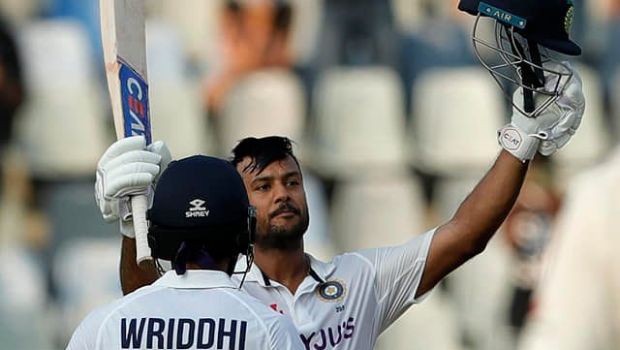 Indian opener Mayank Agarwal was able to get back among the runs in the second Test match against New Zealand at the Wankhede Stadium. Agarwal, who was under a bit of pressure for his poor form, was finally able to get the runs under his belt.

The right-hander scored a magnificent knock of 150 runs in the first innings and followed it with another knock of 62 runs in the second dig in Mumbai.

The Karnataka batter revealed that head coach Rahul Dravid told him not to think about his technique during the middle of the series after he could not deliver the goods in the opening Test match at Kanpur. On the other hand, former Indian legendary batter Sunil Gavaskar advised Agarwal to lower his backlift in the initial stage of his innings and open his right shoulder.

Agarwal was dismissed in the first Test while poking at the outside off-stump deliveries and he was able to come up with a better batting approach in the second Test. The right-hander scored almost half of the team’s runs in the first essay and he was awarded the Player of the Match for scoring a total of 212 runs in the match.

Mayank Agarwal said in the post-match presentation, “It feels good to be back among the runs and this knock is special for me. I didn’t change anything from Kanpur, I just had the mental discipline and determination. The technique isn’t going to be the best all the time, it won’t guarantee runs, but the will to fight is key. Rahul bhai told me about not thinking of technique mid-series, and told me this is the technique that’s got me runs. Sunny sir said I should keep my bat low early on in the innings and opening up my left shoulder. I didn’t really think about the second hundred in the match, but should have converted the sixty. We will relish the abroad challenge in South Africa, so we’re looking forward to that too”.

Meanwhile, Agarwal has definitely put himself as the front contender for the third opening option for the tour of South Africa. Rohit Sharma and KL Rahul will be expected to be the first choice opening pair in the upcoming tour.

Agarwal will look to continue his good show if he gets his chance in the series against South Africa. India will play three Test matches and as many ODIs on the forthcoming tour of the Proteas.