Home » Cricket » IND vs NZ 2021: Mohammed Siraj has been the standout bowler for India this year – Sanjay Bangar

IND vs NZ 2021: Mohammed Siraj has been the standout bowler for India this year – Sanjay Bangar 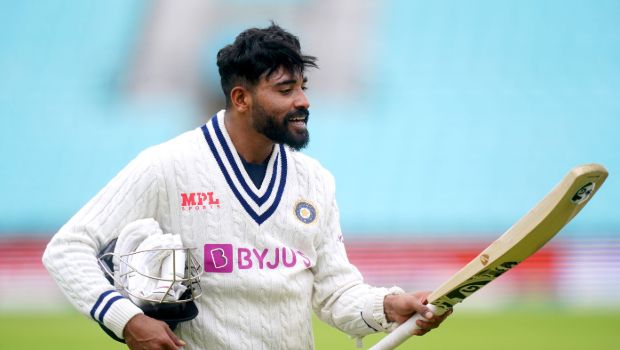 India’s former batting coach Sanjay Bangar has lauded Mohammed Siraj for his incredible performance in 2021. Bangar stated that Siraj has been the standout bowler for the team in the year.

Siraj has impressed with his ability to seam the ball and gives his all whenever he is given the ball by skipper Virat Kohli.

Siraj is known to give his 120% in his every spell and doesn’t depend a lot on the conditions to get his wickets. The fast bowler from Hyderabad has scalped 33 wickets in 10 Test matches at an average of 27.7 and has made a dream start to his Test career.

Siraj scalped three wickets in the first innings of the second Test match against New Zealand and bowled a fine opening spell. The right-arm fast bowler consistently bowled over 140 km/h and breathed down the neck of the opposition batters with his accurate line and length.

Siraj accounted for Tom Latham, Will Young, and Ross Taylor and provided a perfect start to his team in the first innings. The pacer returned with 3-19 in his four overs and played a key role in wrecking New Zealand’s top-order.

Sanjay Bangar said while talking to Star Sports, “Outstanding spell. He is the most improved bowler if you talk about this year. He has been the standout fast bowler for India this year, the way he bowled in Brisbane or Lord’s, and here when he got the chance on Indian soil, he created an impact by taking the first three wickets.”

On the other hand, former Indian opener Aakash Chopra added that Mohammed Siraj is among the top three Indian fast bowlers at the moment. Siraj has impressed in his young Test career and he has bowled with great maturity.

“One hundred percent. In the last match, there was a slight discussion that we might have taken one or two wickets more if Bumrah and Shami had been there. Ishant Sharma does not give those wickets in these conditions.”

The renowned commentator added that Siraj is one of the best hit-the-deck bowlers and he should certainly be part of the team’s playing XI in overseas conditions.

“In overseas conditions, England is the only place where the ball swings a little. In other places, you get the Kookaburra ball and you need to hit that ball hard on the pitch. No one does that better than him. Rest you will get release bowlers or swing bowlers.”

“The sideways movement is not in the air but after pitching. So in my opinion, he is definitely the No.3 bowler if we see from South Africa’s point of view. Bumrah, Shami and Siraj – that’s the trio if you have to pick the team today.”

Siraj will look to continue his good form on the tour of South Africa.