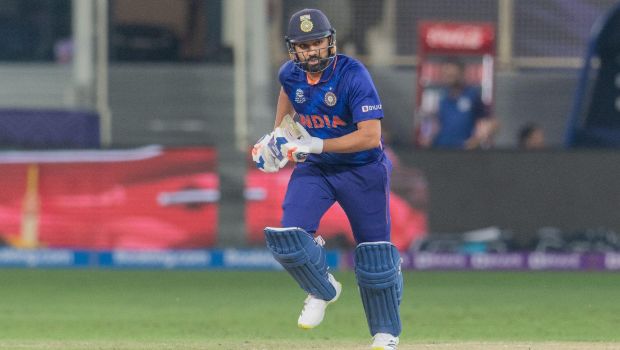 One of India’s major issues in the recently concluded T20I World Cup was the sixth bowling option as Hardik Pandya was not at the peak of fitness in the first two crucial matches against Pakistan and New Zealand.

However, in an attempt to address the issue, India gave debut cap to Venkatesh Iyer who had impressed with both bat and ball while playing for Kolkata Knight Riders in IPL 2021.

But surprisingly India’s new T20I skipper Rohit Sharma didn’t give a single over to Venkatesh Iyer. Rohit is well known for his astute captaincy and he has done a fine job as a T20 captain for Mumbai Indians in the IPL as he has led the franchise to five titles.

As Deepak Chahar and Mohammed Siraj conceded 42 and 39 runs respectively in their four overs, Rohit could have given a couple of overs to Venkatesh Iyer. He had scalped three wickets in four innings he bowled in IPL 2021 for KKR. The right-arm medium pacer conceded his runs at an economy rate of 8.11.

Former Indian opener Aakash Chopra feels it was a rare error from Rohit Sharma to not bowl Venkatesh Iyer as he is mostly accurate in his decision-making as a leader. Chopra added that Rohit’s decision to not bowl Iyer left him a little befuddled.

Aakash Chopra said while talking on his YouTube Channel, “The Indian team said they need a fast-bowling all-rounder, so they played Venkatesh Iyer at six. But they didn’t get him to bowl. I will say it’s a rare error on Rohit Sharma’s part, generally, his captaincy is perfect, but it just left me a little befuddled.”

“Bhuvneshwar Kumar gets Daryl Mitchell out on the latter’s first delivery, Bhuvneshwar Kumar of old. It felt good seeing Bhuvneshwar Kumar bowl both with the new and the old ball. He took two wickets in all and was very economical. Ashwin and Bhuvi – the two experienced players, gave just 47 runs in four overs and took four wickets.”

The second T20I between India and New Zealand will be played at Ranchi on Friday.