Home » Cricket » IND vs NZ 2021: Ready to be flexible and bat wherever the team wants me to, says Venkatesh Iyer

IND vs NZ 2021: Ready to be flexible and bat wherever the team wants me to, says Venkatesh Iyer 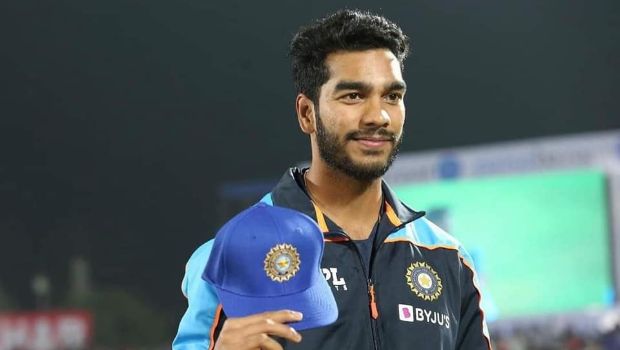 India’s greenhorn all-rounder Venkatesh Iyer is ready to be flexible and bat wherever the team wants him to bat.

Iyer had opened the innings for Kolkata Knight Riders in IPL 2021 as he had scored 370 runs in 10 matches at an impressive average of 41.11 and a strike rate of 128.47 and thus played an instrumental role in taking KKR to the final of the tournament.

However, with Rohit Sharma and KL Rahul batting at the top of their game in the shortest format, it is unlikely that Iyer will get a chance to open the innings for the national team. Iyer was asked to bat at number six in the T20I series against New Zealand and he had to play the finisher role.

Iyer, who is still young in his International career, scored a little cameo of 20 runs off just 15 balls in the final T20I which was played in Kolkata on Sunday. Furthermore, Iyer had batted at number three in the second T20I and had remained unbeaten on 12 runs. The southpaw had scored four runs in the first T20I but could not finish off the game.

Speaking after an all-around effort on Sunday, Iyer said: “I have always maintained that as a professional cricketer, you got to be really flexible as to where you want to bat.

“There might be occasions where even though you are going to play in the middle-order, you might get to bat within the powerplay. That’s something I have really worked on – adapting to whatever situation I am going to play. I am going to look to better that,” he added.

On the other hand, Iyer also gives a sixth bowling option to the team. After not getting a chance to bowl in the first two matches, Iyer finally got an opportunity in the final match. He scalped one wicket and conceded 12 runs in the three overs he bowled against the Blackcaps. Iyer added that it was good to get a bowl in the final game.

“That’s what I am in the team for – batting and bowling. It was good to get a bowl finally. Everyone aspires to play for the country. If the team wins and that too comprehensively, it’s a special feeling. I hope that this continues for a prolonged period of time,” Iyer added.

Iyer will look to keep his good form going and grab his opportunities in the upcoming matches.