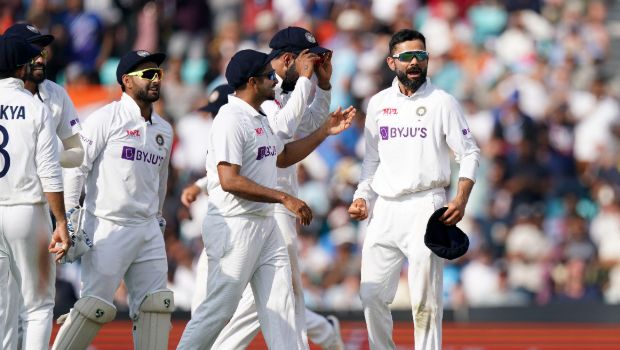 India’s head coach Rahul Dravid feels the team timed their declaration well in the second innings. The hosts declared at 234-7 in the second dig and Dravid stated that they could not have declared earlier.

India was able to bowl four overs at the fag end of the penultimate day and they were able to get the crucial wicket of Will Young, who had scored a fine knock of 89 runs in the first innings.

India bowled 94 overs on the final day and the light was always going to be a hindrance factor, as it was throughout the whole Test match. The home side was able to take eight wickets on the last day but failed to pick the final wicket to register a famous win at Kanpur.

In fact, the first session on the final day went wicketless, which played a huge role in the draw.

“I don’t think so,” Dravid said. “That is not my reading of the game. Till half an hour before we declared, we were under pressure. All three results were possible.

“To be very honest with you, if we had got out – Wriddhiman Shaha showed great courage and character to be batting with the stiff neck that he had – if we had lost our three wickets quickly and they were chasing 240-250 in approximately 110 overs, then they are looking at 2.2-2.3 runs an over. So no that is not my reading of the game. We needed that partnership.”

Meanwhile, Dravid added that India needed some extra cushion of runs before they made their declaration. In fact, Dravid admitted that the home team was themselves under the pressure 45 minutes before they made their declaration call. India was able to add some crucial runs after Wriddhiman Saha and Axar Patel added 67 runs for the eighth wicket before Rahane called them in.

“We lost Shreyas just before tea,” Dravid said. “Then we had that partnership, which was critical for us. From 167 for 7 to get to 230 for 7 was absolutely necessary. If this wicket was turning square and bouncing, and we had both the edges in play, I would have… you know there would have been a different situation.

“My reading of the game was not that at all. Even today you walk into the ground, and you know the opposition needs just under three an over. That’s not a lot of runs if a couple of batters get set. Of course, we thought we did it well. We timed it well. We managed to get a wicket yesterday, and we came very close today. We were under pressure as well, people forget that, even 45 minutes before we declared.”

The second Test match will be played at Wankhede Stadium, Mumbai from December 3.