Home » Cricket » IND vs NZ 2021: With every game, pressure seems to increase – Dinesh Karthik on under-fire Pujara and Rahane

IND vs NZ 2021: With every game, pressure seems to increase – Dinesh Karthik on under-fire Pujara and Rahane 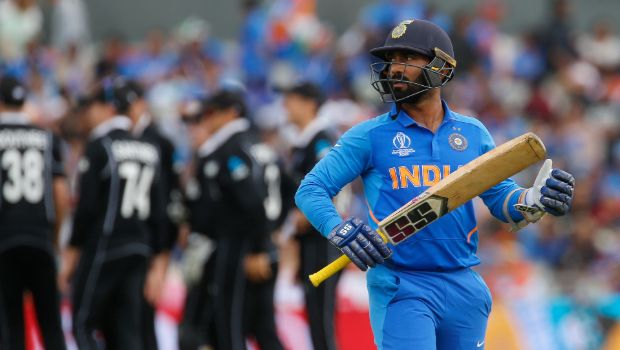 India’s veteran wicket-keeper batter Dinesh Karthik reckons that the pressure seems to be increasing on experienced players like Cheteshwar Pujara and Ajinkya Rahane.

Both of these batters have failed to deliver the goods in the recent past, which has raised doubts about their selection in the Test team.

Rahane has been averaging below 25 in his last 15 Test matches and he hasn’t been at his absolute best. Pujara, on the other hand, has also failed to get going in the recent past.

Meanwhile, Pujara got off to a start as he scored 26 runs in the first innings of the opening Test match against New Zealand at the Green Park Stadium, Kanpur. However, he failed to convert it to a substantial score as he was dismissed while playing away from the body.

Similarly, Rahane also could not make the most of his start as he was dismissed after scoring 35 runs after he chopped the ball back onto his stumps.

While speaking on Cricbuzz, Karthik said: “I think they would be disappointed and there’s no doubt about it. Obviously, there’s talk outside about them that they need to score hundreds because they haven’t for some time. So with every match, the pressure seems to increase.”

He added: “Obviously, because Test match is played sporadically they are not under the spotlight as often, because there’s been a lot more white-ball cricket with the World Cup and the T20Is against NZ. But once Test cricket starts with full tilt again, every time they don’t score runs, they’ll come under the spotlight, so to say in a negative way. And with every game voices from outside seem to get louder.”

Karthik reckons that newly appointed head coach Rahul Dravid will be the catalyst for propelling Pujara and Rahane’s Test career as the former skipper knows the value of such experienced players.

“Having said that, Rahul Dravid knows the value of a Pujara and a Rahane. I think somewhere the quality of Rahul Dravid will come out through these two batters because of very similar methods and very similar styles of play,” Karthik said. “So maybe he feels that he can get the best out of them and sort of a second re-living for them and Rahul Dravid might be the catalyst, for their test career propelling forward.”

India finished the opening day at 258-4 after fifties from Shubman Gill, Shreyas Iyer, and Ravindra Jadeja.