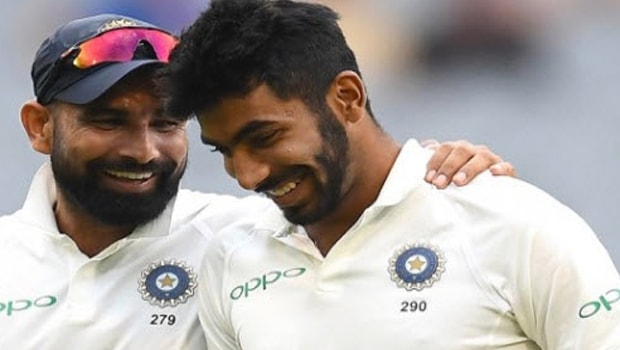 “India’s current pace line-up reminds me a little bit of what the West Indies had back in the ’80s and ’90s” – that’s what former Caribbean batting legend Brian Lara opined after India dominated West Indies in their own backyard in 2019.

Known for their over-dependence on spin even a decade back, things have changed drastically for the Indian cricket team of late. With the emergence of several talented speedsters, the Indian pace battery has swiftly become one of the most dangerous speed units in the world. The imperious bowling is largely the reason for India’s rise and consistency in the ICC rankings and will have a crucial role to play in the upcoming T20 World Cup.

Here we take a look at India’s potent fast-bowling line-up in the shortest format which has built up a reputation for wreaking havoc even against the most potent opposition batting line-ups.

Despite being just 26, Bumrah has proved himself as India’s pace spearhead. A Mumbai Indians find, Jasprit Bumrah excelled under Kohli’s captaincy and has worked his way to being India’s first-choice pacer in all formats. India were struggling to fill the void left by Zaheer Khan and Ashish Nehra but Bumrah, with his unorthodox bowling style, brought stability to the side.

Jasprit Bumrah is now the leading wicket-taker in T20Is for #TeamIndia 🎯🎯 pic.twitter.com/7PWeaq2Fyj

He has blossomed into the go-to bowler for skipper Virat Kohli. His ability to hit the blockhole with searing yorkers and pin-point accuracy make him the premier choice during death-overs. The Baroda lad has 59 wickets in just 50 T20Is at an excellent economy of 6.66 which prove that he can not only stop the run-flow but also provide crucial breakthroughs.

When the world was in awe of Bumrah’s bowling, Shami silently transformed from a standard fast bowler with a few variations to an all-weather maestro. The pacer boasts a diverse range of variations including his yorkers and reverse-swings that could disorient any batting line-up.

While he might not be a regular in the T20 side, he has given commendable performances when given the opportunity. In his last game when New Zealand needed two off four balls, the death-over specialist picked up two crucial wickets of Kane Williamson and Ross Taylor and denied the victory to Black Caps. His last-over heroics saw the game go to the Super Over which India eventually won.

Backed by Kohli, the pacer is slowly making his presence felt in the T20Is. He might be the one partnering Bumrah at the T20 World Cup.

At 30-year-old with 157 limited-over games under his belt, Bhuvneshwar Kumar is the most experienced bowler in India’s current white-ball unit. With an increased pace, knuckle ball and reverse swing, Kumar has added a range of tricks in his arsenal. The pacer boasts the rare ability to swing the ball both ways, just enough to get a nick off the bat or bolt right into the stumps.

The Meerut-born bowler has been out of action since he suffered a groin injury against West Indies last December. But his talent still makes him one of the most sought after-bowlers in India, as illustrated by Sunrisers Hyderabad retaining him for INR 8.5 crores in the IPL auction. Considering his immense contribution and the value he brings to the team, Kumar is still a front-runner for the World Cup in Australia.

The right-arm pacer has bloomed under MS Dhoni’s captaincy at Chennai Super Kings where he was trusted with the new ball regularly. He has picked up 32 wickets across 19 games in his last two seasons of IPL.

Chahar’s impressive run in the IPL and the domestic circuit saw him break into the limited-overs national team. The Agra-born bowler justified his selection as he broke the world record by scalping six wickets for a mere seven runs in a T20I against Bangladesh. The 27-year-old has played only 10 T20Is at the top level but has 17 wickets in his kitty at an impressive economy of just 7, making him worthy of a place in the senior team for the upcoming WT20.

The Delhi lad might be new to the Indian team but has given impressive performances in the few games he has played. The right-arm pacer made his presence felt with brutal bouncers and blockhole yorkers against Sri Lanka, earlier this year. Adding to that, his ability to clock 145 kmph with ease makes him one of the players to watch out for in the coming years.

He is a sought after bowler in the IPL, currently plying his trade for Royal Challengers Bangalore after they roped him in for a whopping INR 3 crores.

After breaking into the Indian T20I team in 2018, Shardul Thakur had to wait for almost two years to make a comeback in the national squad. The wily fast bowler can bamboozle batsmen with the sudden change in pace and length, as seen in India’s tour of New Zealand in February. The 28-year-old pacer put up an inspiring show in the two T20Is against Sri Lanka at the start of the year, picking up five wickets in two matches.

The Mumbai cricketer might not be the first name to make it in the XI but definitely brings value to the team with his own set of strengths.

Having such an enormous talent pool to pick from is sure to give skipper Virat Kohli and the team management a headache when it comes to team selection. But, this is the sort of headache any captain in the world would be happy to have.