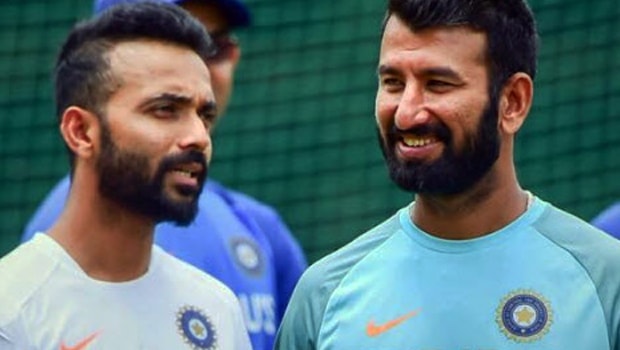 But a stellar record at home and some impressive showings overseas under Kohli’s leadership saw the Men in Blue surge to the summit very quickly.

With Kohli as skipper, India won 33 of the 55 Test matches it was involved in. Boasting a mind-boggling 60% win percentage in Tests, Kohli has firmly established himself as India’s most successful and efficient Test captain of all time and a major reason behind the astounding success rate has been India’s much-improved batting displays in the format.

While Kohli himself has led the charge from the front with the bat, several other batsmen, too, have flourished over the past five years to take India’s Test pedigree to the next level.

Here, we take a look at some of the most notable batters during the period, barring Kohli.
Cheteshwar Pujara

The old-school batsman has consistently racked up big numbers at home and abroad in the last five years. His total of 3767 runs at an average of almost fifty is studded with 12 hundreds and 19 half-centuries.

The gritty batsman has impressed with his valiant performances, especially in Australia, where Indian batsmen usually struggle with the swing and seam. He struck three centuries in four Tests and was instrumental in India’s first-ever Test series win against Australia down under. Some even call him the ‘New Wall’, comparing him to the legend Rahul Dravid.

The vice-captain of the Indian red-ball unit has become a mainstay in the Test team since 2015. The middle-order batsman has stacked 3622 runs with the highest score of 188 in 49 Tests with Kohli at the helm.

The 31-year-old has been rock solid in the middle-order with noteworthy performances in the sub-continent and the Caribbean. He struck two half-centuries and a ton in four innings in the 2019 tour of West Indies.

The feisty batsman has stepped up his game under Kohli’s leadership in all formats of the game. The opener has hit a purple patch in the last 12 months, putting in consistent performances across formats.

The 28-year-old has repaid the faith shown by Kohli and the selectors by amassing 2002 runs in just 35 Test matches under Virat. The right-hander usually keeps wickets in the shorter formats, while Rishabh Pant or Wriddhiman Saha take the role in Tests. But given the form he is in, it’s only a matter of time before Rahul cements his place in the Test squad too.

Despite having been in and out of the Test team in the early stages of his career, Rohit Sharma has been fairly consistent since MS Dhoni passed the Test captaincy baton to Virat Kohli, scoring 1571 runs in 23 games.

The Mumbai batsman was recently promoted as an opener during South Africa’s tour of India in 2019 and the move paid rich returns. The ‘Hitman’ made a remarkable debut as an opener in Test cricket with centuries in both innings of the match. He followed up the two tons with a blistering maiden Test double century to take home the Man of the Series.

Mayank Agarwal is another batsman who has started grabbing eyeballs with his long-lasting opening stands. The opener has played just 11 games but has already notched up 974 runs, including two double tons. The 29-year-old is slowly securing his spot as the premier opener in Test cricket for India.