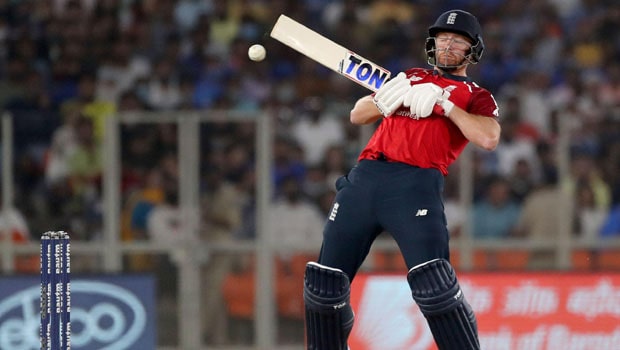 It was raining sixes in the three-match ODI series between India and England. India smashed 11 sixes in their batting innings in the final ODI on Sunday whereas England scored seven sixes in their innings. Thus, the overall tally of sixes in the series is 70, which is the most ODI series of four or fewer matches.

Jonny Bairstow with 14 sixes is the highest six-hitter in the series. Bairstow is followed by Rishabh Pant (11), Ben Stokes (10), and Rohit Sharma (8). Pant did not play in the 1st ODI and hit those 11 sixes in just two innings. Pant smashed seven sixes in the second ODI whereas he scored four sixes in the third ODI.

On the other hand, Jonny Bairstow had thwarted seven sixes in the second ODI match when he had a fine knock of 124 runs off just 112 balls. Furthermore, the England opener had smashed the same number of sixes during his first ODI knock of 94 runs. However, his knock had gone in vain as England had lost the first match by 66 runs.

Meanwhile, India posted 329 runs after England skipper Jos Buttler won the toss and decided to bowl first. India was given a solid start by their openers as Shikhar Dhawan and Rohit Sharma added 103 runs for the opening stand. However, the hosts soon lost four wickets for only 54 runs.

On the other hand, England was down and out as they had lost seven wickets for 200 runs. However, Sam Curran was able to get his team back in the contest with a magnificent knock of 95 runs. The left-hander was dropped by Hardik Pandya when he was on 22 runs. But India was able to hold on as they won by seven runs and sealed the three-match ODI series by 2-1.