Home » Cricket » India vs. Australia, 2nd ODI: Virat Kohli may return to No. 3

India vs. Australia, 2nd ODI: Virat Kohli may return to No. 3 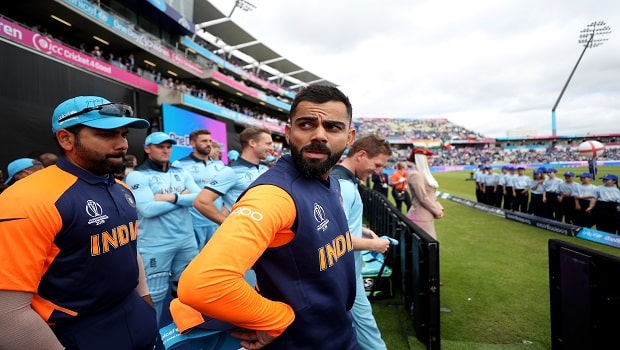 Indian captain, Virat Kohli, could be returning to his regular number three position after the strategy of coming two-down boomeranged.

The strategy backfired against resolute Australia, who recorded a ten-wicket victory over the host in the first ODI series in Mumbai. The second ODI, which holds in Rajkot today, is, therefore, a must-win for the hosts by looking at how they can stop David Warner and Aaron Finch, who hit unbeaten hundreds in the first game.
His plan of dropping down the order was in a bid to field Rohit Sharma failed.

Having been successful in that position, Kohli is expected to return to his regular place. Although, Dhawan, who is an opener, had expressed readiness to bat at number three if asked to by the team.

Kohli, who has ensured stability in the middle-order by batting in number, would be more than willing to walk in one-down.
Rishabh Pant, who was suffering from a concussion, is out of the second game. This means that Rahul will keep wickets.

With the present development, Dhawan could be back to his usual place and open alongside Rohit. The duo made 74 off 91 balls in Wankhede.
According to sources, there could be a toss-up between Rahul and Shreyas Iyer, who had a rare failure on Tuesday at number four.

With Pant out of the clash, Karnataka batsman Manish Pandey, who took his opportunity that he got in the third T20I against Sri Lanka in Pune, could be drafted into th team. This is an interesting period as we await who will get the nod between experienced Kedar Jadhav and rookie Shivam Dube.

Having had a successful year in 2019, Rohit failed in the first game. His form is in no doubt. So, the opener is expected to bounce back strongly today.
It will be another opportunity for Kohli, who is set to break the record of cricket icon Sachin Tendulkar. He is just one hundred short of equalling most hundreds on home soil for India.

Fans are set to see whether Delhi speedster Navdeep Saini will be favoured ahead of Shardul Thakur, who gave away 43 runs in Mumbai.
On the other hand, it is looking sure that Ravindra Jadeja will be picked ahead of chinaman Kuldeep Yadav, who conceded 55 runs in the first ODI while Yuzvendra Chahal could be the lead spinner.

Previous Post
Kohli: Australia dominated us in all department
Next Post
Australian Open qualifiers: Sumit Nagal out, Prajnesh Gunneswaran enters the final round