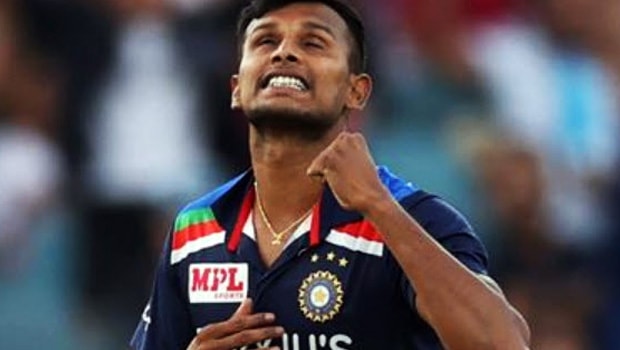 Former Indian opener Virender Sehwag reckons Team India will make a potent bowling line-up for the T20 World Cup if T Natarajan plays with experienced bowlers like Jasprit Bumrah and Bhuvneshwar Kumar. Natarajan has impressed with his skills to consistently hit the blockhole and he has done a fine job so far.

The left-arm pacer has all the variations under his arsenal and he is a shrewd campaigner. Natarajan conceded only 20 runs in his quota of four overs and scalped two wickets against Australia in the second T20I at the SCG on Sunday. Thus, Natarajan was instrumental in keeping Australia below the 200-run mark.

Natarajan has played only three International matches so far however he has shown the skills to go a long way in his career. The left-arm fast bowler had impressed one and all while playing for Sunrisers Hyderabad in the Indian Premier League 2020 as he snared 16 wickets in 16 matches.

On the other hand, Jasprit Bumrah is well known for his bowling accurately and has one of the best yorkers in the world. However, Bumrah hasn’t been in the best of forms in the recent past and he was rested in the first two T20Is against Australia.

Meanwhile, Bhuvneshwar Kumar has the skills to get the early breakthroughs as he can swing the ball both ways. But, Kumar is currently recovering from the hip injury which he suffered during the Indian Premier League. Ergo, if India can have these three bowlers to be fit and ready for the T20 World Cup, their chances of going the way will be boosted.

Virender Sehwag said while talking to Sony Sports, “India will have a very strong bowling lineup for the T20 World Cup if T Natarajan plays with Bumrah and Bhuvi. The T20 format is such that a bowler who gives less runs today, can get hit tomorrow.”

“But his execution is very good, whether it is the yorker, slower one or length ball. Bumrah also has the same quality. He will realise after this tour, how big a change it has brought to his career. People will be wanting to learn from him and trying to become like him.”

In fact, Virender Sehwag also played a key role in Kings XI Punjab roping in T Natarajan but the pacer didn’t play a lot for the franchise due to his injury woes. However, he has done a fine job while playing for the Orange Army.

The third T20I between Australia and India will take place at SCG on Tuesday.