Home » Cricket » IPL 2020: A good line and length is difficult even for Kohli or Rohit – Anrich Nortje

IPL 2020: A good line and length is difficult even for Kohli or Rohit – Anrich Nortje 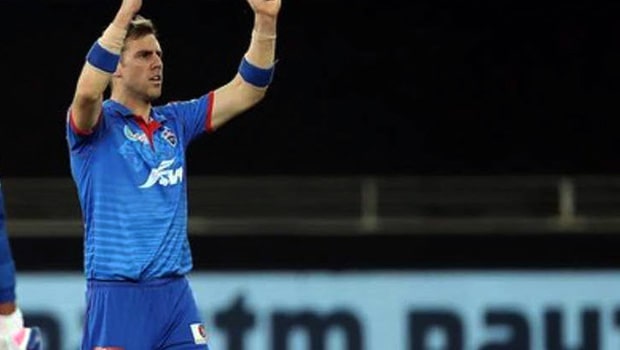 Delhi Capitals fast bowler Anrich Nortje reckons a good line and length is difficult even for the best batsmen like Virat Kohli and Rohit Sharma. Nortje has impressed with his express pace in the ongoing season of the IPL and he has scalped 12 wickets in nine matches he has played. The gun fast bowler has conceded his runs at an impressive economy rate of 7.75.

It is noted that an extra couple of yards of pace can make a real difference. A batsman might face a delivery of 140 kmph with some ease but he could be hurried into a shot if the same ball is bowled at more than 145 kmph.

Anrich Nortje is a proper Test bowler, who is known to hit the hard length. Nortje has a smooth action and he has breathed down the neck of the best batsmen in the IPL.

The Proteas fast bowler has bowled with great heart and control in the ongoing season, especially in the fag end of the innings. Nortje also recorded the fastest delivery in the IPL when he clocked 156.2 against Jos Buttler.

The South African has been right on the money in the death overs and has formed a potent bowling partnership with his fellow countryman, Kagiso Rabada. Thus, Nortje has played a crucial role in the success of Delhi Capitals in the ongoing season.

“Try and keep it simple. It is not about the players and more about what we need to do and try and focus on the plan. Better the player, the more you have to focus. A good length is a good length and then work around our strengths and see where we can beat them and try and get them out. Even to Rohit, a good line and length will be difficult to play as long as we can hit the mark,” Nortje said while talking to ANI.

Anrich Nortje was signed as the replacement for England all-rounder Chris Woakes and he has been brilliant for Delhi Capitals. The Proteas fast bowler will look to continue the good show in the ongoing season.

Delhi have ticked the right boxes as a unit and their pace battery has been instrumental in their success. Kagiso Rabada has scalped 19 wickets in nine matches. The Shreyas Iyer-led team will next play Kings XI Punjab at Dubai International Cricket Stadium on 20th October.