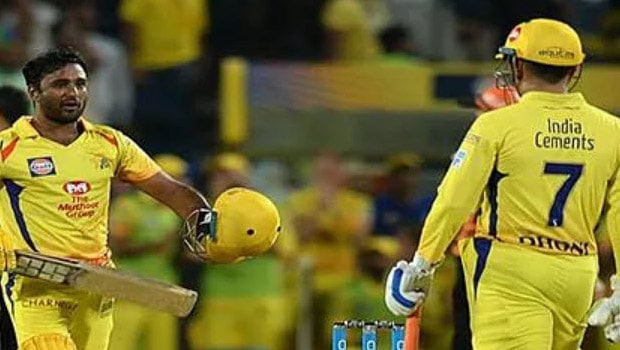 Former Indian opener and now a cricket analyst Aakash Chopra has picked CSK’s ideal playing XI. Chopra picked Ravindra Jadeja as one player who could shine for the franchise. The former Delhi batsman selected Shane Watson and Ambati Rayudu as the openers of the team.

Chopra has backed former South African skipper Faf du Plessis to bat at one down in the absence of Suresh Raina. Faf has amassed 1853 runs in 71 IPL matches at an average of 31.40 and a strike rate of 126.74.

The renowned commentator has backed CSK skipper MS Dhoni to bat at number five. Dhoni’s batting position has been of much debate in the recent past, especially since Suresh Raina has pulled out of the tournament due to personal reasons.

In fact, Chopra wants Dhoni to walk into bat whenever 10-11 overs are left in an innings. Dhoni has scored 4432 runs in 190 IPL matches and he has been a consistent performer for the CSK.

Aakash Chopra preferred Imran Tahir over Mitchell Santner in the final XI of CSK. The South African leg-spinner has picked 79 wickets in 55 IPL matches. At number nine, Chopra picked another leg-spinner in Piyush Chawla, who was roped in by CSK for a whopping 6.75 crores. Chawla has claimed 150 wickets in 157 IPL matches.

Deepak Chahar, who is tested positive for Covid-19, and Shardul Thakur are the main fast bowlers of the team for Aakash Chopra. Chahar has impressed with his skills to move the ball both ways and he has picked 33 wickets in 34 IPL matches. Shardul Thakur has bagged 36 wickets in as many matches.