IPL 2020: Ali Khan ruled out of the tournament 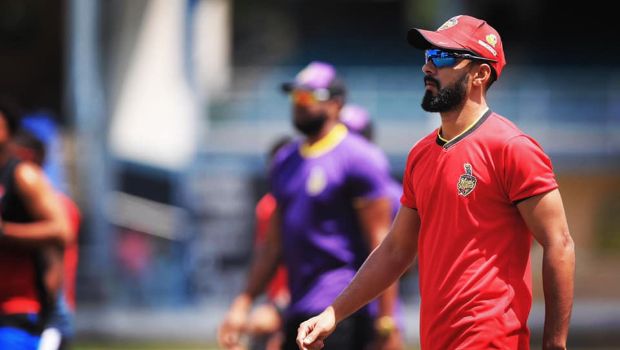 Kolkata Knight Riders’ fast bowler Ali Khan has been ruled out of the ongoing Indian Premier League 2020 due to an injury.

Ali had earlier become the first American player to be roped in by a IPL franchise in the history of the tournament. The right-arm fast medium had replaced injured England bowler Harry Gurney in the KKR squad.

Khan didn’t get to play any match in the IPL in the ongoing season. Meanwhile, he had impressed with his skills in the recently concluded Caribbean Premier League while playing for eventual winners Trinbago Knight Riders. TKR won their fourth CPL title as they came up with a fine collective effort.

Ali also played his part in the successful campaign for TKR as he scalped eight wickets in eight matches for the franchise at an impressive economy rate of 7.43.

“Earlier, Kolkata Knight Riders signed up Ali Khan as a replacement for injured Harry Gurney. Khan became the first USA cricketer to be signed up by an IPL franchise. Unfortunately, Khan has since been injured and will miss the rest of the IPL 2020 season,” an official IPL statement said.

Meanwhile, the ongoing season is currently 20 matches old but it has already seen many players getting ruled due to injury. SRH pack Bhuvneshwar Kumar has been ruled out due to hip injury whereas Delhi Capitals spinner Amit Mishra was ruled out due to finger injury.

Earlier, SRH received another blow as their all-rounder Mitchell Marsh was ruled out with an ankle injury. Furthermore, Ambati Rayudu and Ravichandran Ashwin had to miss a couple of matches due to their respective injuries. Thus, the injuries have troubled the franchises and thus it is crucial to have a good bench strength in a long tournament like the IPL.

On the other hand, Kolkata Knight Riders is at the fourth place in the points table with two wins and two losses from four matches.

KKR will need to come up with better performances and find the impetus in the middle overs. The Dinesh Karthik-led team will play their fifth match of the season against previous season runners-up Chennai Super Kings at Sheikh Zayed Stadium, Abu Dhabi today.