Home » Cricket » IPL 2020: Anil Kumble reveals why Chris Gayle was not part of the final XI against SRH

IPL 2020: Anil Kumble reveals why Chris Gayle was not part of the final XI against SRH 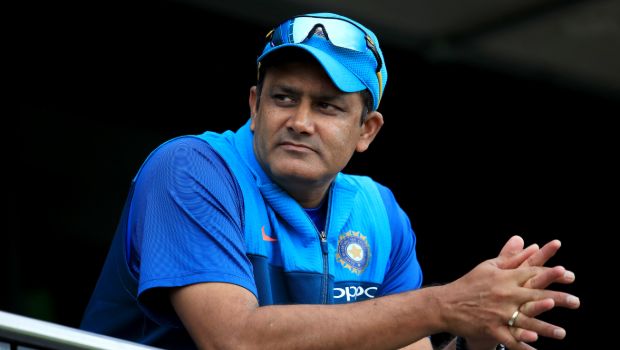 Gayle was expected to play his first match of the ongoing season for Kings XI Punjab but he was sick with food poisoning and thus was ruled out of the contest.

Punjab have been opening the innings with their skipper KL Rahul and Mayank Agarwal. Both the right-handers from Karnataka have done a fine job for their team as they are among the top three run getters of the tournament.

Punjab have already lost five matches out of the six they have played and they wouldn’t want to leave it till the end to play their talisman batsman – Chris Gayle. The southpaw is the most successful batsman in the T20 format and he can take the game away from the opposition in a matter of overs.

“Chris Gayle was going to play today’s match but he is sick. He is down with food poisoning that’s why he isn’t in playing eleven,” Kumble told commentators during the match.

Furthermore, Gayle can replace Glenn Maxwell in the playing XI. The Australian has been out of form as he has mustered only 41 runs in five innings for KXIP. Gayle can provide the firepower at the top of the order for Punjab and he will also bring experience to the side.

On the other hand, KXIP were surprisingly not playing Mujeeb Ur Rahman in their first five matches. The mystery spinner played his first match of the season against SRH but didn’t have a great outing as he conceded 39 runs in his four overs.

KXIP batting coach Wasim Jaffer stated that they don’t want to leave Gayle and Rahman out of the final XI before it’s too late for them in the tournament.