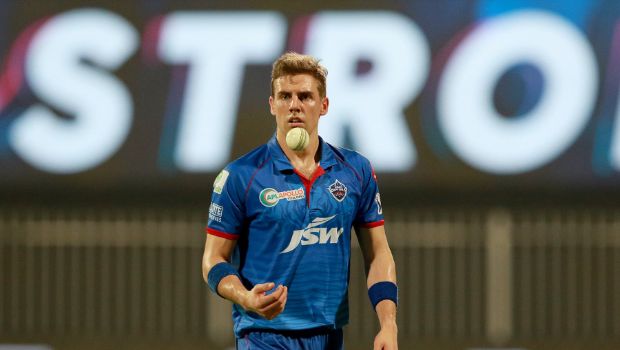 Delhi Capitals gun fast bowler Anrich Nortje was on fire during the 30th match of the season against Rajasthan Royals at Dubai International Cricket Stadium on Thursday.

The Proteas fast bowler clocked 156.2 kmph, which is the fastest ball in the history of the tournament.

Nortje bowled two bullets at Jos Buttler as he clocked 156.2 and 155.1 on consecutive balls. In fact, Buttler was able to hit a boundary on the fastest ball but he was cleaned up by the pacer on the next ball, which came back into the right-hander.

The right-arm fast bowler broke the previous record of 154.4 kmph, which was bowled by Royal Challengers Bangalore pacer Dale Steyn. In fact, Nortje also recorded the third fastest delivery of the IPL as he clocked 154.74 kmph.

Meanwhile, Rajasthan Royals required 29 runs off the last three overs against Delhi Capitals to chase down 162 runs. However, Nortje bowled a superb 18th over in which he conceded only four runs and also took the imperative wicket of well-settled Robin Uthappa.

Thus, Nortje scalped two wickets in the four overs he bowled and conceded 33 runs in his quota of overs. The South African was awarded the Player of the match for his brilliant performance with the ball.

On the other hand, Nortje has been a great signing for Delhi Capitals. The Proteas gun pacer was named as the replacement for Chris Woakes.

The right-arm ace paceman has snared 10 wickets in eight matches of the tournament. Delhi Capitals will next play Chennai Super Kings at Sharjah Cricket Stadium on 17th October.