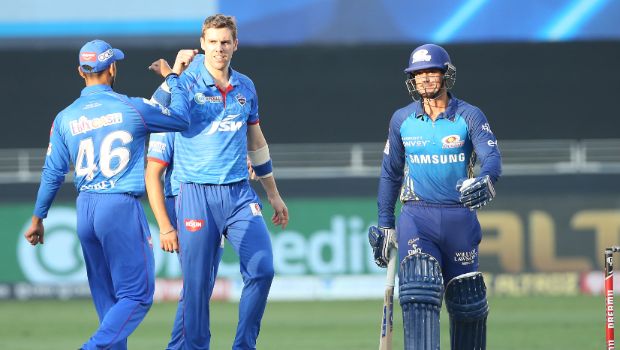 Delhi Capitals gun fast bowler Anrich Nortje has been a big positive for the side in the ongoing Indian Premier League.

The Proteas pacer has impressed with his express pace and he has breathed down the neck of the opposition batsmen. Nortje was once again at his best against Royal Challengers Bangalore at Sheikh Zayed Stadium, Abu Dhabi on Monday as he scalped three wickets and conceded 33 runs in his four overs.

Thus, Nortje was awarded the Player of the match as he played a key role in restricting RCB to a sub par total of 152 runs. Nortje took the crucial wicket of well-settled Devdutt Padikkal and then dismissed Chris Morris in the same over. The fast bowler also got the wicket of Isuru Udana and didn’t allow RCB to break free.

Nortje revealed his bowling plans after the game as he stated that the strategy was to follow the basics and not be too predictable with their line and length. The plan worked wonders as DC halted RCB’s innings at 152. Hence, it was a fine bowling performance from Delhi Capitals.

Anrich Nortje said in the post-match ceremony, “I said it time and time again, it’s just doing the basics right and wasn’t about something special from one guy. Coming into this game, small things started feeling better and I think those small things, once you get that right, you get your rhythm. We were thinking to make them hit to the bigger boundary and stick to our plans against each batsmen. There was little bit of dew at the end of our innings and we tried not to be predictable. Yorker would have been the obvious option and we wanted to change it and see how it goes and wanted to hit the hard length. Having a bit of extra pace always helps”.

Meanwhile, the partnership of Kagiso Rabada and Anrich Nortje has done wonders for Delhi Capitals in this season. Both the South African bowlers have been right on the money and they have played a key role in taking their team to the playoffs.

Rabada is currently the Purple cap holder as he has scalped 25 wickets in 14 matches whereas Anrich Nortje has snared 19 wickets in 13 matches he has played.