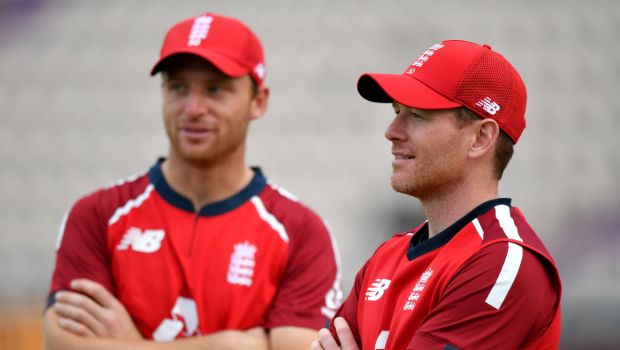 Kolkata Knight Riders skipper Eoin Morgan has heaped praise on former captain of the team, Dinesh Karthik for taking a blinder of a catch against Rajasthan Royals.

KKR gun pacer Pat Cummins produced an outside edge of Rajasthan Royals opener Ben Stokes’ bat and Karthik flew to his left like a bird to grab an outstanding catch.

The ball was traveling at a high speed as Stokes had flashed hard at it but Karthik’s reflexes were up to the mark. Karthik’s unbelievable catch will definitely be among the front contenders for the catch of the season.

Statistically, the wicket will go down under Pat Cummins’ belt however KKR skipper Eoin Morgan stated that Stokes’ dismissal was completely Karthik’s wicket as he made it possible with his Superman effort.

“DK’s catch was remarkable. When a guy takes a catch like that, it is completely his wicket, it has nothing to do with the bowling at all. It’s a keeper’s catch, keeper’s wicket,” Morgan told Cummins in a video posted by iplt20.com.

Furthermore, it was a big wicket for Kolkata Knight Riders as Ben Stokes had been in ominous form. Stokes had scored a fine century against Mumbai Indians and followed it with another good knock of a half century against Kings XI Punjab.

On the other hand, Morgan heaped praise on the collective team effort of the team after the win over Rajasthan Royals.

Morgan said, “The guys came out and played well in a game where there were different circumstances involved that are completely uncontrollable. The guys came out and focused on exactly what they wanted to do. They played in a way we would have liked to play throughout the tournament. Glad that result went our way and whatever happens from here is completely out of our control.”

Meanwhile, KKR were at the bottom of the points table before their match against RR. However, the win over RR has helped them climb to the fourth place in the points table. If Mumbai Indians will defeat Sunrisers Hyderabad, the playoffs path will be cleared for Kolkata Knight Riders.

Moreover, KKR won by a massive margin of 60 runs, which has helped them boost their Net Run rate. KKR can not do much now and they can only pray that the other results go in their favour so that they can seal their place in the last four teams of the tournament.