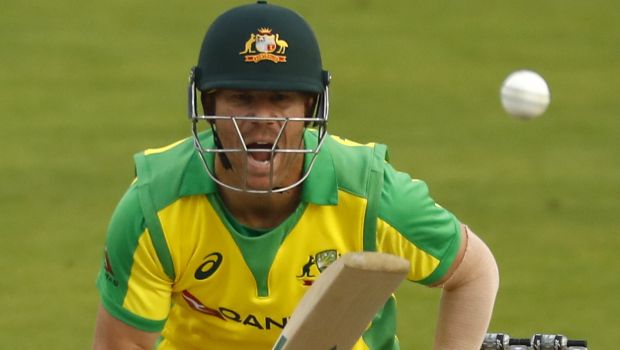 Sunrisers Hyderabad skipper David Warner wrote his name in the history books after his knock of 52 runs against Kings XI Punjab at Dubai International Stadium on Thursday.

This was the 50th time when Warner went past the 50-run mark and thus he became the first batsman to reach the milestone.

Warner has thus far recorded 46 IPL fifties and four centuries in the tournament. The southpaw is one of the most successful foreign batsmen in the IPL and he has been a consistent performer for SRH over the years. The attacking left-hander also completed 9500 runs in the T20 format during his knock against Punjab.

The pugnacious batsman from Australia scored his 9th consecutive fifty plus score against Kings XI Punjab.

On the other hand, RCB skipper Virat Kohli, who is the highest run-getter in the IPL, is second on the list as he has gone past the 50-run mark on 42 occasions in the tourney. Suresh Raina and MI captain Rohit Sharma have both scored 50+ scores on 39 occasions in the IPL.

Warner is the highest run-getter as an overseas batsman in the IPL as the southpaw has amassed 4933 runs in 132 IPL matches at an impressive average of 41.9 and a blistering strike rate of 141.47.

Thus, Warner is 67 runs away from becoming the first overseas batsman to reach 5000 IPL runs and he will also become the fourth overall after Virat Kohli, Suresh Raina and Rohit Sharma.

Meanwhile, SRH cruised to a convincing win of 69 runs as they thumped Kings XI Punjab. Warner won the toss and decided to bat first. The SRH skipper and Jonny Bairstow added a fine partnership of 160 runs to lay down a solid foundation for the middle order. In fact, Warner played a second fiddle to Bairtsow, who smashed 97 runs off just 55 balls.

In reply, Punjab were bundled out for a meagre score of 132 runs. SRH will next play Rajasthan Royals at Dubai International Cricket Stadium on 11th October.