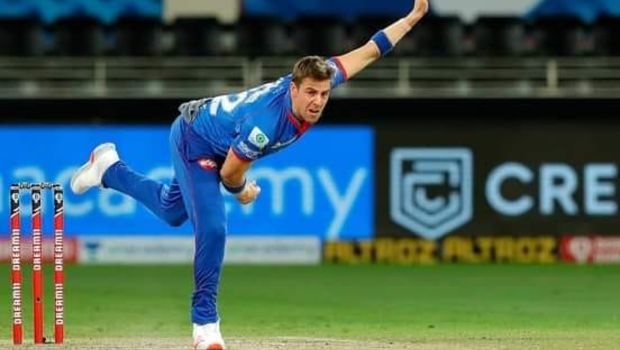 Delhi Capitals fast bowler Anrich Nortje revealed he was unaware that he had bowled the fastest ball in the tournament history when he clocked 156.2 kmph.

Nortje was launching rockets in his first over during the clash against Rajasthan Royals at Dubai International Cricket Stadium on Wednesday.

In fact, Nortje’s fastest ball of 156.2 was hit for a four by Jos Buttler but the Proteas gun pacer was able to dismiss the RR opener on the next ball. Thus, it was an interesting battle between Nortje and Buttler.

“Yeah, the battle against Buttler was interesting. I know he plays the scoop shots, but when he played the first one, it took me by surprise,” Nortje said. “I did not think he would do it again, but he played the shot once again on the next delivery. He played really well, but I stuck to my strength, obviously we saw how the wicket was playing so I was trying to use the wicket and get some variation.”

Nortje stated that he has worked hard to increase his pace in the practice sessions and he has been able to reap the rewards.

“I heard about it afterwards. I did not know about it at the time,” Anrich told Shikhar Dhawan in a video posted by IPLT20.com. “I have been working really hard getting my pace right up there. Been working on my braced leg and my front arm.. simple stuff. Need the attitude to get some pace behind it but still need to get it in the right area.”

On the other hand, the Proteas pacer bowled a superb 18th over in which he conceded only four runs and also scalped the crucial wicket of Robin Uthappa, who was well settled at the crease. The ace paceman bagged two wickets and conceded 33 runs in his quota of four overs. Thus, Nortje played an important role in Delhi Capitals’ win of 13 runs.

Nortje has impressed with his bowling skills and he has troubled the opposition with his extra yard of pace. More importantly, Nortje has been right on the money with his line and length and he has bowled accurately in the death overs. Ergo, he has made a potent partnership with fellow countryman, Kagiso Rabada.

DC will next face CSK at Sharjah Cricket Stadium on 17th October.