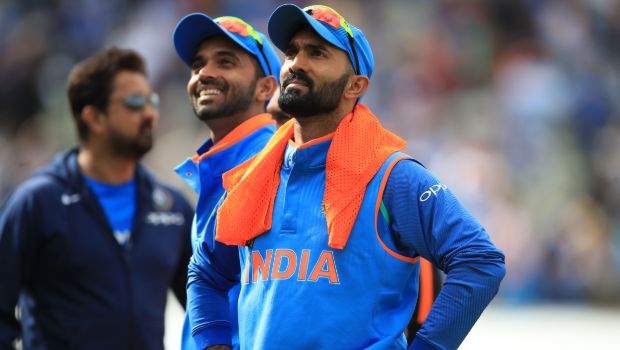 Kolkata Knight Riders skipper Dinesh Karthik was all praise for young guns – Shivam Mavi and Kamlesh Nagarkoti after his team’s convincing win of 37 runs against Rajasthan Royals at Dubai International Stadium on Wednesday.

KKR posted a par score of 174 runs after losing the toss with Shubman Gill and Eoin Morgan playing crucial knocks.

First, KKR most experienced fast bowler Pat Cummins provided the imperative wicket of Steve Smith to set the tone. Subsequently, the youngsters were able to follow suit. Mavi beat the in-form Sanju Samson for pace and the flamboyant batsman was caught at mid-wicket.

The youngster provided another crucial wicket of Jos Buttler, who went after a wide delivery only to be caught at a wide slip. Kamlesh Nagarkoti, who had gone wicketless in the debut match, got his first IPL wicket on the first ball he bowled. In the same over, Nagarkoti dismissed Riyan Parag to put KKR right on top.

Thus, both Mavi and Nagarkoti, India’s 2018 Under-19 winners, scalped two wickets each. Furthermore, both the youngsters were brilliant in the field as Nagarkoti took two catches whereas Mavi grabbed one.

Dinesh Karthik said in the post-match ceremony, “Wouldn’t call it a perfect game. There are a lot of areas we need to improve. The way Gill batted, Mavi bowled, Russell batted. Also the youngsters going after the high catches. Archer bowled really well. Wasn’t that easy a wicket to bat on. Couple of guys made it look better than it was. These boys, the journey they’ve been through when they’re not playing, is a hard one. Putting runs on the board is what we thought was the best way to go forward on this ground”.

It was a fine team effort from KKR to win their second game of the season. The Dinesh Karthik-led team lost their opening match against Mumbai Indians but they have won their last two matches to make a good comeback.

Meanwhile, KKR’s inexperience in their pace battery was regarded as their Achilles Heel but the youngsters stood tall to the challenge against Rajasthan Royals. On the other hand, Varun Chakaravarthy also impressed once again with his performance as he scalped two wickets and conceded only 25 runs in his four overs.

KKR will play their next game against Delhi Capitals at Sharjah Cricket Stadium on 3rd October.