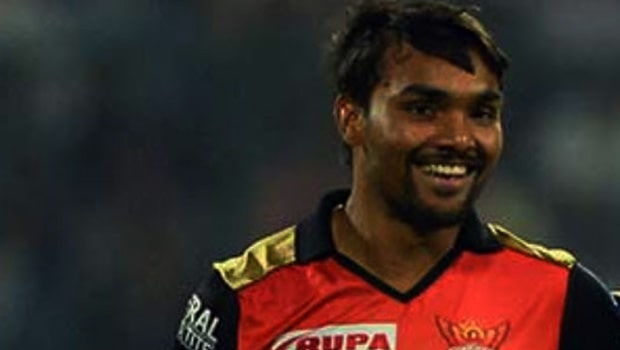 Sunrisers Hyderabad swing bowler Sandeep Sharma has been a consistent performer in the Indian Premier League. The right-arm pacer has been an integral part of the franchise and he has done a fine job in providing early breakthroughs for the side. In the absence of injured Bhuvneshwar Kumar, the onus to deliver the goods is on the shoulders of Sandeep Sharma.

Sandeep, who recently scalped his 100th IPL wicket, was at his best against Royal Challengers Bangalore at Sharjah Cricket Stadium on Saturday. The swing master provided a perfect start to his team as he clean bowled the in-form Devdutt Padikkal.

It was a slow pitch at Sharjah and Sandeep was guile in his approach as he made good use of the knuckleball. The right-arm pacer also got the big fish, Virat Kohli, who made the mistake of playing the cover drive in the air to be caught by Kane Williamson.

Sandeep stated that getting Virat Kohli’s wicket was special. The 27-year old conceded only 20 runs in his four overs quota and scalped two wickets. Consequently, RCB could only post a paltry score of 120 runs on the board after SRH skipper David Warner won the toss and decided to bowl first.

Sandeep Sharma, who was awarded the Man of the Match said in the post-match ceremony, “When I started bowling, it was a bit sticky. It’s coming nicely, it’s got cooler here, so it’s helping. I have been bowling the knuckleball, Jonny (Bairstow) has been helping me. It took around three or four months to get it right. Kohli is one of the greatest batsmen, so getting him out is special. Now we are finding the momentum with one game to go. We are excited about that, let’s see what happens”.

Meanwhile, SRH were able to get to the target with five wickets in hand and 35 balls to spare. This win has helped SRH in keeping their playoff hopes alive and their last match of the league stage will be a must-win affair. In fact, the Orange Army are now in the top four of the points table as they have a good Net Run rate of +0.555.

SRH will aim to continue the good show and they have kept themselves in the hunt by winning their last two matches. The David Warner-led team will play their last league match against Mumbai Indians at Sharjah Cricket Stadium on 3rd November.