Home » Cricket » IPL 2020: Happy to get a chance of bowling in the Powerplay – Washington Sundar

IPL 2020: Happy to get a chance of bowling in the Powerplay – Washington Sundar 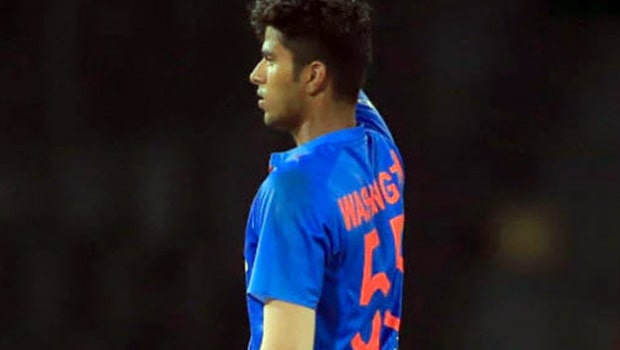 Royal Challengers Bangalore prodigy spinner Washington Sundar has always relished the challenge of bowling in the powerplay overs. Sundar is known to keep a tight line and length and he has the skills to keep the batsmen in check. The right-arm spinner had done a fine job of bowling economically in the first six overs for Rising Pune Supergiant.

It is never easy for a spinner to bowl in the powerplay overs as only two fielders are allowed outside the 30-yard circle. However, Sundar has done a fine job and he hardly gives the width to the batsmen to swing their arms.

In the match against Mumbai Indians, Sundar bowled three overs in the powerplay in which he conceded only seven runs and also scalped a crucial wicket of Rohit Sharma.

The off-spinner finished his quota of four overs and gave away only 12 runs in his spell. Thus, he played a crucial part in putting MI on the backfoot in the initial stage of the innings.

Sundar mentioned that he is happy as Virat Kohli has backed him in the powerplay overs. Sundar has played 24 IPL matches in which he scalped 17 wickets.

“Feeling really good, I did some planning coming to this game, and I was very happy I was given this role and I enjoy bowling in the Powerplay,” he noted in the press conference. “Very glad that the captain has got so much confidence and the management. The challenge is to keep doing this, there are still a lot more games coming up and I should be able to do this and win games for the RCB.”

On the other hand, AB de Villiers was handed over the onus of wicket-keeping against MI. Sundar feels AB donning the gloves, adds more balance to the side. The former South African captain is a perfect team man and he also played a crucial knock of 55 runs off just 24 balls.

Meanwhile, RCB has got off to a good start as they have won two matches out of the three they have played. RCB will play their next fixture against Rajasthan Royals at Sheikh Zayed Stadium, Abu Dhabi on 3rd October.