Home » Cricket » IPL 2020: I wanted to deliver a magical performance for the team – Mohammed Siraj

IPL 2020: I wanted to deliver a magical performance for the team – Mohammed Siraj 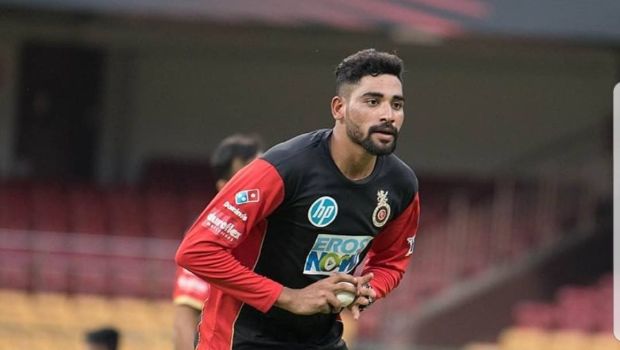 Siraj scalped three wickets in his first two overs and didn’t even concede a single run. Thus, he became the first bowler in IPL history to bowl two maiden overs.

Siraj returned with figures of 3-8 in his four overs as he bowled with fire. The right-arm fast bowler got the ball to swing and breathed down the neck of the opposition batsmen with his accurate line and length. Siraj first dismissed Rahul Tripathi when he produced an outside of the right-hander’s bat.

Subsequently, he bowled a peach of a delivery to get rid of left-hander Nitish Rana. Siraj also dismissed Tom Banton and had a fine day at the office. The fast bowler from Hyderabad stated that he wanted to deliver a magical performance for the team.

Siraj had replaced Shahbaz Ahmed in the final XI and he was able to justify his selection. KKR could only manage 84 runs on the board after their 20 overs and it was a cakewalk for RCB as they convincingly won by eight wickets and 39 balls to spare.

Siraj also said: “By looking at the wicket, I did not think the ball would swing. Kohli asked me to stay ready to bowl the new ball. I was practicing bowling the new ball… When I got the opportunity, I backed my strength.”

RCB also climbed to second place in the points table as they have won seven matches out of the 10 they have played. The Virat Kohli-led team will look to continue the good show and they are on the right track to qualify for the playoff stages.

It was a dominating performance from RCB as they obliterated KKR at Abu Dhabi. Yuzvendra Chahal and Washington Sundar also didn’t allow KKR to have any kind of momentum in their batting innings. Furthermore, Chris Morris has added a shot in the arm to the team since he has been part of the final XI.

RCB will next play against CSK at Dubai International Cricket Stadium on 25th October.