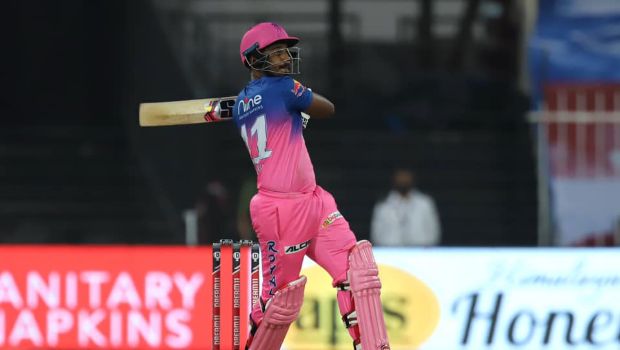 Rajasthan Royals talisman batsman Sanju Samson had a rollicking start to the IPL 2020 as he scored two match winning fifties in the first two games of the season.

But it was noticed that Samson was trying to attack the opposition without settling at the crease and it was leading to his downfall. However, Samson worked a bit on his game plan against defending champions Mumbai Indians at Sheikh Zayed Stadium on Sunday. The stylish batsman took his time in the initial phase of the tournament and then attacked MI bowlers after getting his eye in.

Samson went on to score an impressive knock of 31-ball 54 and added 152 runs with Ben Stokes to help his team get over the line quite comfortably by eight wickets. Stokes scored a brilliant 107 from 61 balls and it was a fine alliance between the two batters.

“I kept on believing in myself,” Sanju Samson told Star Sports. “When you play 14 games, you’ll have to go through ups and downs. I worked a bit on my game plan. On bigger grounds, on different wickets, you need to take more time, play more cricketing shots, that was the difference I made today.”

Samson added that his game plan is simple and he was taking one over at a time. The Kerala batsman also revealed that he had a great time while batting with Ben Stokes.

“It was amazing (batting with Stokes). We have had a good time out in the middle in the last three games, this was the best time with him, I really enjoyed it.

Sanju Samson was at his best and he would like to continue the good show in the last two matches. Rajasthan will need to win their final two games and they are also dependent on the results of other two teams to go through the playoff stages.

Rajasthan will play their next game against Kings XI Punjab on 30th October at Sheikh Zayed Stadium, Abu Dhabi.