Home » Cricket » IPL 2020: It is not going to be easy for MI in playoff clash against Delhi Capitals – Sanjay Bangar

IPL 2020: It is not going to be easy for MI in playoff clash against Delhi Capitals – Sanjay Bangar 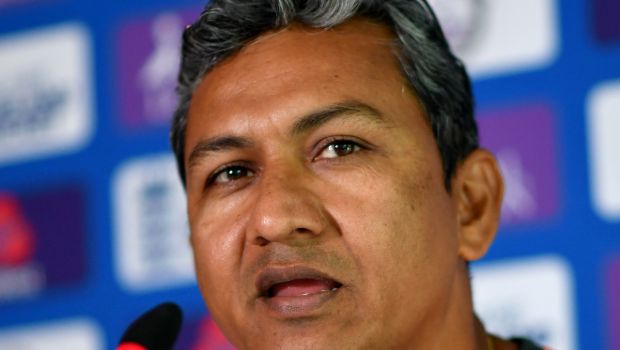 Former Indian batting coach Sanjay Bangar reckons it is not going to be a cakewalk for defending champions Mumbai Indians in the first qualifier against Delhi Capitals.

Bangar feels it all depends on the match day and the team which plays better on the day, will have the last laugh.

Mumbai Indians hold the advantage as they had defeated Delhi Capitals on both occasions of the league stage in the ongoing season. Furthermore, MI has more experience of playing the big matches in the tournament. However, one can not rule out Delhi Capitals as they have a potent team.

Delhi have fast bowlers like Kagiso Rabada and Anrich Nortje who both have impressed with their express pace. Rabada is currently the leading wicket-taker in the tournament as he has scalped 25 wickets in 14 matches whereas Nortje has snared 19 wickets in 13 matches. Moreover, DC have experienced spinners like Ravichandran Ashwin and Axar Patel.

Bangar feels DC have got the skills to defeat Mumbai Indians and they looked like a team which can challenge the defending champions. DC have got the right players in their team and it would be all about executing their plans in the all-important match.

“Success early on, failures were in the latter half of the tournament, and then a very good match to qualify for and play in the second spot. I believe that the kind of combination they have of good, young, experienced Indian batsmen, a battery of overseas fast bowlers, and Indian spinners, that is a good mix of experience, pace, youth and then if there’s one team that can challenge Mumbai Indians, its Delhi Capitals. So, be aware Mumbai Indians, it’s not going to be easy,” Bangar said while speaking on Star Sports show Game Plan.

Delhi Capitals were brilliant in the first phase of the league stage but they veered off the track in the business end of the tournament. DC lost four matches on the trot but they made a good comeback against RCB to seal the second place finish in the points table.

Delhi Capitals will look to come up with a collective effort against MI and they will know that they will have to be at their best to beat a top team like the Mumbai Indians. DC will face MI in the first qualifier at Dubai International Cricket Stadium on 5th of November.