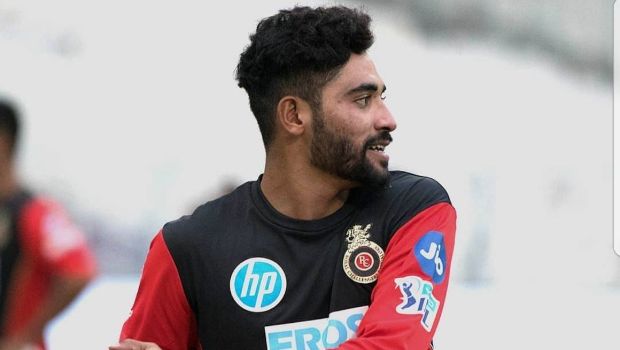 The fast bowler from Hyderabad was right on the money as he was able to hit the correct line and length. Siraj dismissed KKR opener Rahul Tripathi on the third ball of his first over and then bowled Nitish Rana for a golden duck with an incoming delivery.

Thus, Siraj’s first over was a double wicket maiden and he followed with another wicket maiden as he dismissed Tom Banton. Siraj conceded only eight runs in his next two overs and finished his four overs quota with an impressive bowling figures of 3-8. Hence, he was also awarded the Player of the match.

Siraj is known for his accurate line and length in the red-ball form and he pitched the ball in the right areas. RCB captain Virat Kohli noticed that there was some help for the seamers after the first over from Chris Morris and thus gave the ball to Siraj instead of Washington Sundar.

On the other hand, Royal Challengers Bangalore bowlers bowled a total of four maiden overs, which is the most in an IPL innings. Chris Morris and Washington Sundar bowled the other two maiden overs.

KKR could only manage 84 runs in their 20 overs and it is the lowest total in the IPL history when a team wasn’t bowled out. Furthermore, KKR took 15 overs to score 50 runs, which is the most in the IPL. The previous record was held by Kings XI Punjab when they took 13.1 overs to score 50 runs against CSK at Durban in IPL 2009.

KKR could not get going as RCB bowlers kept them at bay. Subsequently, RCB convincingly won by eight wickets.

RCB will next face CSK at Dubai International Cricket Stadium on 25th October.