Home » Cricket » IPL 2020: Natarajan has been the find of this IPL – David Warner

IPL 2020: Natarajan has been the find of this IPL – David Warner 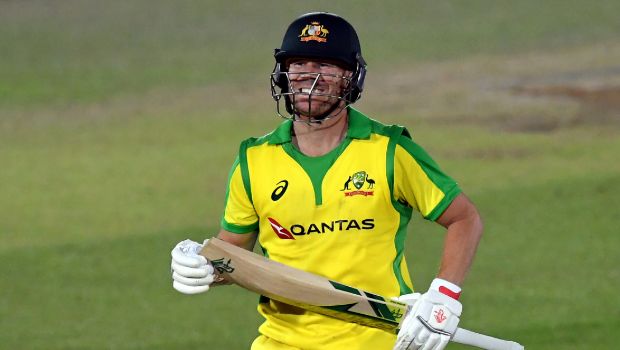 Sunrisers Hyderabad captain David Warner was all praise on the team’s fast bowler T Natarajan, who impressed with his execution of the yorkers in the IPL 2020.

SRH’s journey ended in the tournament after they lost the second Qualifier against Delhi Capitals by 17 runs at Sheikh Zayed Stadium, Abu Dhabi on Sunday.

Natarajan was one of the biggest positives for the Orange Army as he was brilliant in the death overs. In fact, SRH pack leader Bhuvneshwar Kumar was ruled out after hip injury and thus the onus was on Sandeep Sharma and T Natarajan to deliver the goods. Both of these fast bowlers did a fine job for the franchise.

Natarajan scalped 16 wickets in 16 matches at an average of 31.50. The left-arm was able to deliver the goods whenever he was under the pump and he was the go-to bowler for David Warner in the death overs.

Meanwhile, at one stage, it looked like SRH wouldn’t be able to qualify for the playoff stages as they had won only three matches out of the nine they had played. However, they were able to turn the tables in the second half of the league stage and defeated the top three sides to make their way into the final four.

Consequently, Warner was proud of his team as he stated that not many had given them a chance to go this far in the tourney.

Warner said in the post-match ceremony, “First and foremost, no one gave us a chance at the start. Mumbai has a great team, Delhi as well, and RCB, but I’m proud to be where we are today. Natarajan is a find of this IPL, and he’s been outstanding. Rashid has been amazing, and so has Manish Pandey at No. 3. From an all-round perspective, it’s been great. I’d like to thank all our supporters at home”.

On the other hand, Warner rued the team’s fielding, which wasn’t up to the mark. SRH dropped three catches against Delhi Capitals and there were also misfields and overthrows, which came to bite the team.

“The main thing is attitude in the field. You can’t win if you don’t take catches, we’ll have to do much better next time – that’s what’s let us down in this tournament – the attitude on the field”.

Furthermore, SRH didn’t have the rub of the green on their side as they lost players like Bhuvneshwar Kumar, Wriddhiman Saha and Mitchell Marsh to injuries.