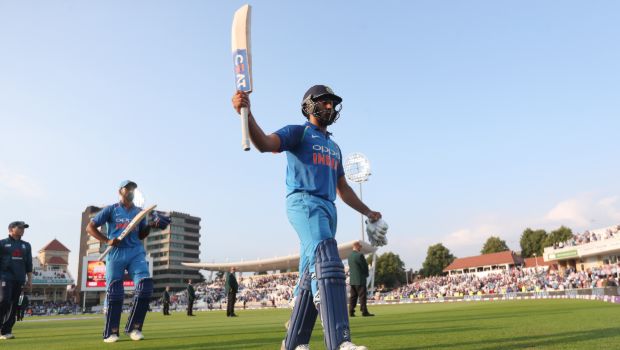 Rohit is the most successful IPL captain as he has led Mumbai Indians to four IPL titles. The Mumbai batsman is known to get the best out of his players and he has done a fine job.

Rohit Sharma has led Mumbai Indians in 106 matches in which the team has won 61 games and lost 43 whereas two have been tied. Ergo, Rohit has a win percentage of 57.54 in the IPL.

Rohit has led with a calm head on his shoulders and he has taken the best decisions in the crunch situations of the big matches. The right-hander was handed over the captaincy in 2013 and he was able to lead the franchise to glory in his maiden season as captain.

In fact, Mumbai have won two finals by one run in 2017 and 2019, which goes to show that Rohit has not succumbed under pressure. Rohit has been instrumental in the success of Mumbai Indians and he has also played a key role as a batsman.

“I have always been saying that Sharma is the best captain in this tournament (IPL) after Dhoni. The way he understands the game and makes tactical changes is simply outstanding,” Sehwag said in a conversation with sports presenter Gaurav Kapoor on Cricbuzz.

Meanwhile, the defending champions didn’t have a great start to the ongoing IPL season as they lost their opening match against Chennai Super Kings by five wickets. However, they made a roaring comeback against Kolkata Knight Riders as they won by 49 runs.

Rohit Sharma played a key role in the win as the flamboyant batsman scored a fine knock of 80 runs off just 54 balls with a help of six sixes. Thus, he became the second Indian batsman to score 200 IPL sixes after MS Dhoni. Rohit was also awarded the Player of the match for his brilliant inning.

Rohit will look to continue his good form in the upcoming matches for MI and lead the team to their fifth title in the IPL. Mumbai Indians will next face Royal Challengers Bangalore on 28th September at Dubai International Stadium.