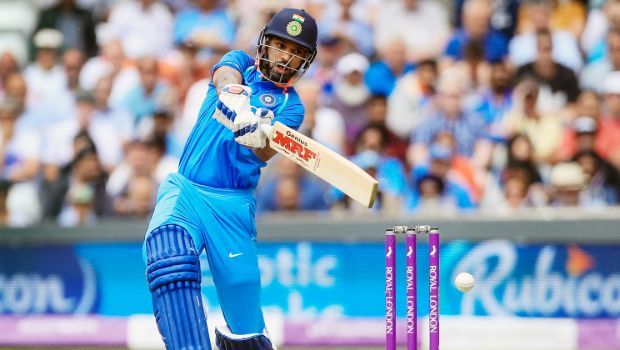 Delhi Capitals opening batsman Shikhar Dhawan has been in top form in the last couple of matches. Dhawan scored an unbeaten 106 runs from 61 balls against Kings XI Punjab at Dubai International Cricket Stadium on Tuesday.

This was the second hundred on the trot for Dhawan and he also became the first batsman in the IPL history to achieve the milestone.

Consequently, Dhawan was awarded the Player of the match but his efforts went in vain as Kings XI Punjab won the match by five wickets. However, Dhawan has been looking in ominous form after getting a slow start in the tournament.

Dhawan was getting off to starts in the initial phase of the tournament but he wasn’t able to convert them into substantial scores. However, the southpaw has timed the ball to perfection in the last couple of matches. The left-hander had scored an unbeaten 101 off just 58 balls against Chennai Super Kings at Sharjah Cricket Stadium on Saturday.

The left-hander has scored 465 runs in 10 matches of the tournament so far at an impressive average of 66.43 and a blistering strike rate of 149.04. Ergo, Dhawan has played a key role in providing a fine platform to Delhi Capitals and the team’s captain Shreyas Iyer heaped praise on the southpaw for the same.

“I’m really happy for Shikhar Dhawan the way he’s been going – he’s really creating an amazing platform for us as a batsman,” said Iyer. “Definitely we should be knowing our roles pretty well and it’s just one game. Other than that I feel all the batsmen are in a really good frame of mind. Just a few matches here and there, it can go wrong, it’s a long tournament, fatigue creeps in. But keeping that aside I think we need to focus on our strengths and really work on them,” he added.

In fact, Dhawan has been striking over 170 in his last two knocks as he has been a lone warrior for the team. The southpaw didn’t get any support from the other end against KXIP and thus DC could only post a sub par total of 164 runs on the board.

Dhawan will aim to continue his good form and he can take the game away from the opposition if he continues to bat like this.

DC will play their next match against KKR at Sheikh Zayed Stadium, Abu Dhabi on 24th October.