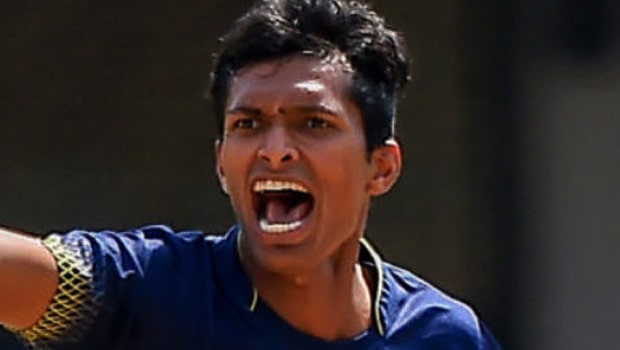 Royal Challengers Bangalore fast bowler Navdeep Saini will be a doubtful starter for the team’s next game against defending champions Mumbai Indians on Wednesday at Sheikh Zayed Stadium, Abu Dhabi. Saini suffered an injury during the match against Chennai Super Kings at Dubai International Cricket Stadium on Sunday.

The fast bowler, who has impressed with his express pace, collected the ball in his follow through when CSK captain MS Dhoni smashed the ball back at him on the last ball of the 18th over. However, Saini was hit on the webbing between the thumb and first finger and went off the field.

RCB physiotherapist Evan Speechly revealed that Saini received stitches immediately and he has been currently monitored.

“Saini has split his webbing in the last ball there. He obviously got hit on the thumb on the right hand. He has just split the webbing over there. Fortunately, we had a good hand surgeon, he stitched up nicely. So we could just monitor over the night and check it after getting ready for the next game,” said Speechly on RCB TV.

In fact, Virat Kohli had suffered a similar injury back in IPL 2016 at Kolkata against KKR. However, Kohli decided to continue to bat and scored an unbeaten 75. Furthermore, Kohli played the next game with the injury and scored a 50-ball 113 against Kings XI Punjab.

But Saini’s participation in the next game looks bleak as the ball had struck him on his bowling hand.

“Virat, four-five years ago, he had it in Kolkata, we managed to stop the bleeding and he smashed a 100 after we got a plastic surgeon who had stitched it,” said Speechly.

“Unfortunately you cannot compare the two injuries. Some people can manage it and some can’t. It’s also because Saini’s injury is on his bowling hand so it puts a lot of pressure on him so I cannot be sure when he will be good to go. I am hoping that he will be good to play in the next game and the rest of the tournament.”

Meanwhile, Navdeep Saini has been an integral part of RCB bowling line-up as he has snared five wickets in 11 matches of the tournament at an economy rate of less than eight.

If Saini fails to recuperate on time for the next game, Umesh Yadav could replace the fast bowler from Delhi. However, Yadav was on the expensive side in the first two matches of the tourney.

RCB is at the third position in the points table after seven wins from 11 matches.