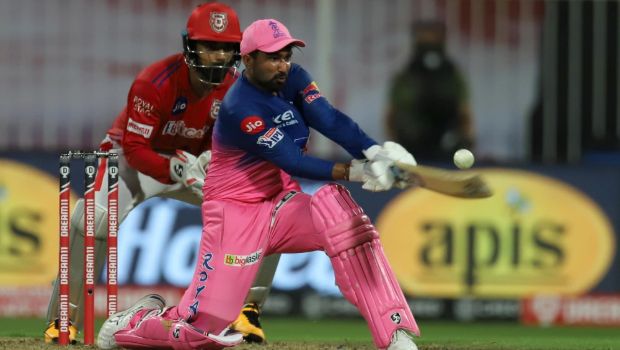 Rajasthan Royals batsman Rahul Tewatia became a hero from zero after his blistering knock of 31-ball 53 against KXIP at Sharjah Cricket Stadium on Sunday.

The southpaw was under the scanner after he was struggling to make any contact with the ball.

The left-hander, who was sent as a pinch hitter to up the run-rate, failed to get going in the initial phase of his innings. In fact, the strategy of the team management was questioned by the commentators and they stated that a proper batsman should have been sent out to bat.

Tewatia made just five runs off the first 13 balls and he was on eight off 19 balls. The pressure was mounting on Sanju Samson, who was once again timing the ball to perfection. However, the left-hander was able to turn the tide in his team’s favour.

It was a matter of one big hit and Tewatia was able to get his confidence back. 51 runs were required off the last three overs and the game seemed to be done and dusted for Rajasthan Royals.

However, it was the 18th over, which cost KXIP 30 runs, that turned the tables in RR’s favour. Tewatia was star of the show as he clobbered five sixes in Sheldon Cottrell’s over to turn the match upside down. In the last 10 balls which Tewatia faced, he smashed 39 runs to get his team back into the contest.

Rahul Tewatia said in the post-match ceremony, “That was the worst first 20 balls that I have ever played. I was hitting the ball very well in the nets, so I had belief in myself and kept going. I was not hitting the ball well initially, I saw in the dug-out, everybody was curious because they know that I can hit the ball long. I thought I had to believe in myself. It was a matter of one six, after that, I got going. Five in an over went amazing. Coach sent me to hit sixes off the leg-spinner, but unfortunately I didn’t hit him. Ultimately, I hit off the other bowlers”.

Rahul Tewatia, who represents Haryana, has thus far played 22 IPL matches, in which he has scalped 17 wickets. In fact, the leg-spinner bowled an expensive over, which leaked 19 runs. However, he was able to cover-up with the bat when the match seemed almost lost.

Rajasthan Royals have now won both their matches and they are currently placed at the second place in the points table. The Royals will next face KKR at Dubai International Stadium on 30th September.