IPL 2020: Virat Kohli fined for slow over rate against KXIP 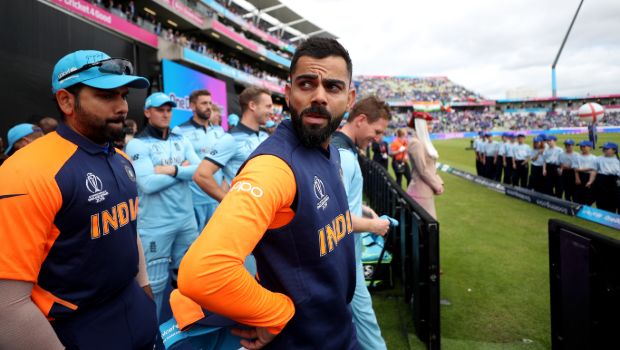 Royal Challengers Bangalore skipper Virat Kohli has been fined for slow over rate after the match against Kings XI Punjab at Dubai International Stadium on Thursday.

Kohli opted to field first after winning the toss and he had three fast bowlers, Umesh Yadav, Dale Steyn and Navdeep Saini in the final XI.

The first innings lasted for one hour and 51 minutes, which is more than the allotted time for a team. This is RCB first offence of the season under IPL code of conduct relating to the minimum over rate offences. Consequently, Virat Kohli has been fined a whopping amount of INR 12 lakhs.

RCB was not up to the mark in their second game as they were obliterated by KXIP. Punjab posted a above par total of 206 runs after their skipper KL Rahul scored a majestic knock of 132 runs off just 69 balls. This was Rahul’s second IPL hundred and it was the first century of the ongoing season.

In reply, RCB were bundled out for 109 as they failed to find any impetus in their batting inning after losing wickets at regular intervals and thus lost by a huge margin of 97 runs.

Meanwhile, Virat Kohli could only score a solitary run. Kohli admitted in the post-match ceremony that he didn’t have the best day at the office as he also bungled two catches of KL Rahul. The flamboyant batsman gave two chances when he was 83 and 89 but Kohli failed to grab both opportunities.

Virat Kohli said, “I have to stand in front and take the brunt of it, not the best day in the office, couple of important chances of KL when he was set and that cost us 35-40 runs at a later stage. Maybe if we restricted them to 180 we wouldn’t have been under pressure from ball one of the chase. We know exactly where we went wrong and I have to put my hand up and say a couple of important chances went down”.

RCB had a good start to their IPL campaign as they won their opening match against SRH. However, their death bowling woes were once again palpable in the clash against KXIP as their bowlers conceded 74 runs in the final four overs.

RCB will play their next match against defending champions Mumbai Indians on 28th September at Dubai International Stadium.