IPL 2020: Virat Kohli on the cusp of huge milestone 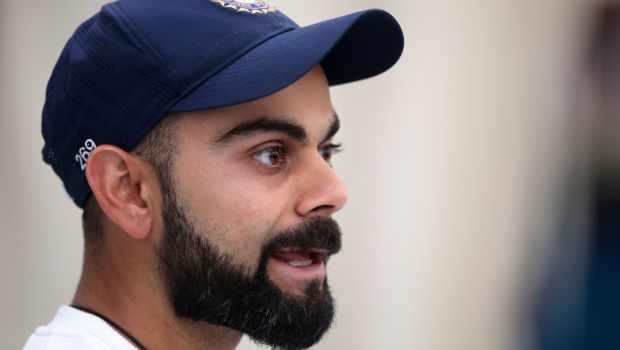 Royal Challengers Bangalore skipper Virat Kohli is on the cusp of achieving a huge milestone. Kohli is only 10 runs away from scoring 9000 T20 runs.

The talisman will become the first Indian batsman to get to the landmark. The right-hander wasn’t in the best of forms as he could only muster 18 runs in the first three matches of ongoing IPL 2020.

However, the RCB captain was able to prove his mettle as he scored a fine knock of 72 runs off just 53 balls against Rajasthan Royals to get back into form. Thus, he was able to help his team in chasing down the target of 155 against the inaugural champions.

Consequently, it shouldn’t be a surprise if Kohli scores 10 runs needed to get to the milestone against Delhi Capitals at Dubai International Stadium on Monday.

Kohli is a pivotal cog in RCB’s wheel and it was crucial for the team to get their captain back in form. The right-hander will aim to continue the same form in the coming matches and RCB will be a force to reckon with if Kohli scores runs consistently.

RCB have had a decent start to the season as they have won three matches out of the four they have played and they would look to continue the good show. Devdutt Padikkal has shown great promise as the youngster has already scored three fifties. Furthermore, Aaron Finch and AB de Villiers have also played crucial knocks.

Meanwhile, Virat Kohli is one of the most consistent batsmen in the world. Kohli is also the leading run-getter in the IPL as he has amassed 5502 runs in 181 matches at an impressive average of 37.68. Kohli has five centuries and he has 37 fifties under his belt in the lucrative Twenty20 league.

Kohli is currently at the seventh place in the list of all-time run-getters of the T20 format. The list is topped by Universe Boss, Chris Gayle, who has accumulated 13296 runs in his glorious career of 404 matches. Kieron Pollard is at the second place with 10370 runs in 517 matches whereas Shoaib Malik has gathered 9926 runs in 392 matches.