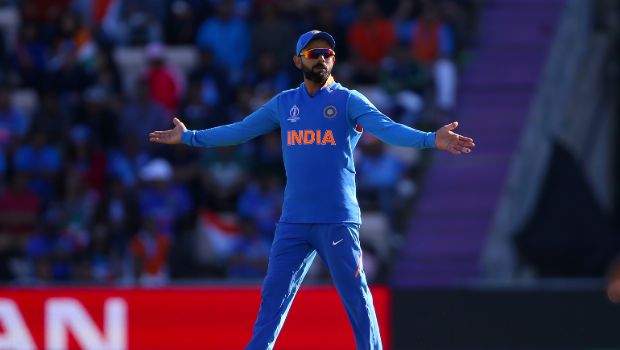 Former Indian legendary batsman Sunil Gavaskar was not impressed by Virat Kohli’s captaincy in the fag end of the innings against Kings XI Punjab at Dubai International Stadium on Thursday.

Kohli was poor in the field as he gave two reprieves to Kings XI Punjab captain KL Rahul when he was on 83 and 89.

Rahul then went on to punish the RCB bowlers and finished with an unbeaten knock of 132 runs. It was a major difference in the game as KXIP scored 74 runs in the last four overs to take the game away from RCB.

Gavaskar questioned Kohli’s tactics in the death overs as he gave last over to Shivam Dube, who leaked 23 runs. In fact, Kohli didn’t have a lot of options as his main fast bowler Umesh Yadav had already conceded 35 runs in his three overs. On the other hand, Dube had bowled well in the first two overs as he had scalped two wickets and gave away only 10 runs.

Veteran fast bowler Dale Steyn also had an expensive outing as he conceded 57 runs in his quota of four overs. In fact, RCB’s death bowling has been their Achilles Heel over the years and Kohli once again looked helpless.

Punjab smashed 49 runs in the last two overs and RCB had to pay the price for dropping two catches.

“Well, it certainly seems to be the case as far as his tactics were concerned in the last 4 overs because he just dropped KL Rahul in the 70s and the 80s and that may have stayed on his mind,” Gavaskar said while speaking about the impact of the dropped catches.

Meanwhile, RCB were under pressure in the run chase of 207 runs and it could have been a different story had they restricted KXIP to 180 runs. Furthermore, Virat Kohli’s team kept losing wickets at regular intervals and never got going in their batting innings. RCB were skittled out for 109 runs and thus lost by a gargantuan margin of 97 runs.

RCB would aim to bounce back in their next match against defending champions Mumbai Indians, which will be played at Dubai International Stadium on 28th September.