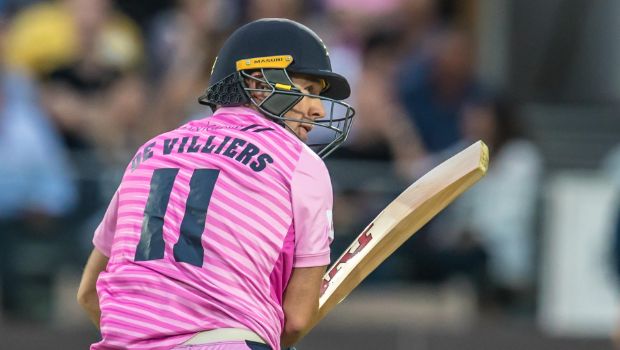 Royal Challengers Bangalore talisman batsman AB de Villiers has picked his best IPL XI, in which he has selected MS Dhoni as the leader of the team.

Virender Sehwag and Rohit Sharma will open the innings for the Proteas superstar.

Royal Challengers Bangalore captain Virat Kohli is the highest run-getter in the IPL as he has accumulated 5878 runs in 192 matches at an average of 38.17 and a strike rate of 130.74.

AB picked either one of Kane Williamson, Steve Smith and himself to bat at number four in his team. Williamson has scored 1619 runs in 53 IPL matches whereas Smith has scored 2333 runs in 95 IPL matches. AB is one of the most consistent foreign players in the IPL as the talisman has scored 4849 runs in 169 IPL matches at an average of 40.41 and a blistering strike rate of 151.91.

Ben Stokes bats at number five for AB de Villiers as the English all-rounder has scored 920 runs in 42 IPL matches whereas he has scalped 28 wickets. MS Dhoni is the captain and wicket-keeper of the team as the legendary player has scored 4632 runs in 204 IPL matches at an average of 40.99 and a strike rate of 136.76.

Ravindra Jadeja and Rashid Khan are the two spin all-rounders of the team. Jadeja has scored 2159 runs in 184 IPL matches and he has snared 114 wickets. Rashid Khan is one of the top spinners in the T20 format as he has taken 75 wickets in 62 IPL matches.

Bhuvneshwar Kumar, Kagiso Rabada and Jasprit Bumrah constitute the pace battery. Kumar has bagged 136 wickets in 121 IPL matches. Rabada, who had won the Purple cap in IPL 2020, has picked 61 wickets in 36 IPL matches. Bumrah, who is known for his accurate death bowling, has claimed 109 wickets in 92 IPL matches.