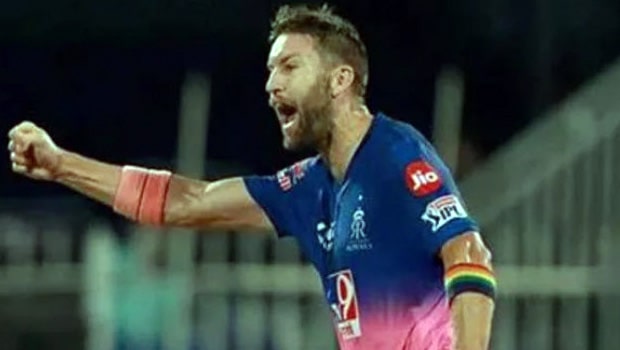 Rajasthan Royals have suffered another blow as their fast bowler Andrew Tye has left the team’s bio-bubble and he has flown back to Australia due to personal reasons. Earlier, England’s all-rounder Liam Livingstone had decided to go back to England due to bubble fatigue.

Rajasthan Royals talisman all-rounder Ben Stokes earlier suffered a finger injury after he took Chris Gayle’s catch in the opening clash and thus returned back to England for his surgery. Furthermore, Jofra Archer has been ruled out of the entire tournament due to finger injury.

Rajasthan Royals have now only four overseas players in their squad – Jos Buttler, David Miller, Chris Morris and Mustafizur Rahman. Thus, RR don’t have any back-up foreign player, which is a big blow for them.

On the other hand, Andrew Tye has played 27 IPL matches in which he has scalped 40 wickets at an average of 21.8 and economy rate of 8.47. Tye is known for his slower-ball variations and has a good knuckleball under his repertoire.

Meanwhile, Andrew Tye had a successful stint for Perth Scorchers in the Big Bash League 2020-21 season as he snared 21 wickets in the 17 matches he played and thus played a key role in taking his team to the final of the tournament.

Rajasthan Royals haven’t had a great start to their campaign as they have lost three out of the five matches they have played. The inexperienced batting order has led to the team’s downfall and they will look to come up with collective performances in the coming

matches. RR depend heavily on the shoulders of Sanju Samson, David Miller and Jos Buttler to do the bulk of the scoring.

The Sanju Samson-led team won their previous match against Kolkata Knight Riders by six wickets. RR will play their next match against defending champions Mumbai Indians at the Arun Jaitley Stadium, Delhi on 29th April.